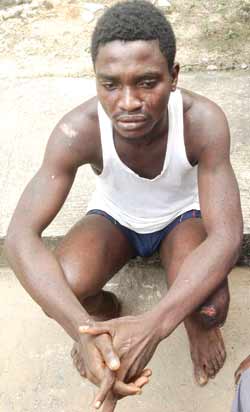 Sadiq Adetumobi,23 is currently cooling his heels at the State Criminal Investigations Department,SCID,over the recovery of stolen fabrics worth millions of naira in his possession.
Robbers as gathered, broke into some shops at Idumota market Monday, carted away assorted fabrics. Two days later, some of the stolen lace materials were reportedly recovered from Sadiq following which he was subsequently arrested.
But in this interview with Crime Guard, he claimed to be oblivious of the stolen materials.
According to him, “ at about 3am on Monday, I saw three persons walking round my area with bundles of clothes. I accosted them and said they can not pass through our domain without giving me a share of what they had. So, one of them gave me two bundles of the lace materials.
Next day, I took the materials to the market to sell, only to be arrested. I did not know that the person I took the clothes to was the owner of the stolen goods.
When I got there, I met a woman who showed interest. I told her it was N25,000 at first but she said she would pay N5000. Without much ado, I told her to bring the money and he asked me to wait for his apprentice to get her money”
Unknown to him, while he was waiting, the owner had contacted the police. As he stretched out his hand to collect the money from the shop owner on her arrival, the policemen caught him and handcuffed both hands.
Asked what he was doing outside at an ungodly hour, he replied, “ we usually stayed on top of the bridge to collect toll from container drivers who usually took the route at night. That was where I was with other boys when I sighted the people with the bundle of clothes”
His claim of being innocent of the crime will however be determined at the court.