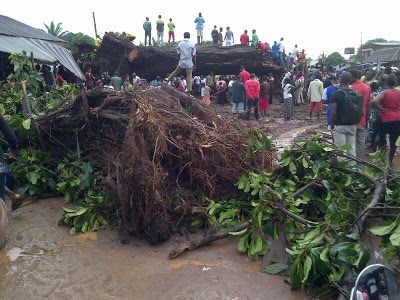 It was tears and anguish yesterday night in  Umudagu, Mbieri community in Mbaitoli council area of Imo state as no fewer than 31 persons have been confirmed dead following the fall of an ancestral ‘Uko’  tree estimated to have been over 200 years in existence.
The tree which fell around 8pm, Thursday night, during a rainstorm also left scores of persons injured and about 7 others either buried in the rubble or missing.
The size of the disaster was occasioned by the fact that under the tree is a location of a popular night market simply described as “Ukwu Uko market” meaning the market under the ‘Uko’ tree.
The market usually started at about 3pm everyday and terminated at about 9.30pm or 10pm.
The tree, our correspondent gathered had been a source of concern to the youths of the village who had repeatedly called for its removal to no avail. Elders of the community had described the tree as an ancestral landmark that should not be removed.
Ironically, discussion into the removal of the tree was resumed yesterday. The meeting to agree on modality and necessary appeasements to be carried out before its removal was going on in the town hall near the Ukwu Uko market, when the rain began. The meeting was then adjourned due to the rain and our source who said he was part of the meeting said, “Some of us were still on our way home when we heard the tree crashing down. On racing back to see what has happened, we met a massive carnage, a scene of blood and mangled flesh. It was a gory sight. And we tried to help as much as we can. Most of our people did not sleep a wink till this morning, as no effort was spared in saving what could be saved.”
A motorcycle operator who spoke at the scene of the disaster said he took part in the rescue and confided that, “Over 35 persons died in this tragedy, without counting those critically injured who were rushed off to the hospital. We loaded three ambulance bus-loads of corpses yesterday night, see my hands, I have not even washed it.”
About five persons were seen wailing in search of their wards who they said were at the market Thursday night but have since not been seen. Digging for those buried in the rubble yielded only more dead bodies.
The dead body of a baby estimated to be about three-year old was said to have also been recovered around 3am Friday morning. A severed leg was also left behind while the body of an aged woman was being recovered from the rubble.  A woman was however rescued alive on Friday morning and rushed off to the hospital.
Rescue efforts were hampered by the sheer size of the tree as it took a caterpillar and other heavy duty machines to move the tree to enable any substantial rescue work.
On the rescue team, were villagers, men of the National Security and Civil Defence Corps, men of the Nigerian Fire Service, some health workers and other security operatives.
The area has totally been crowded by people who came to see for themselves the size of the tragedy.

Beauty Of The Day – Victoria Kimani

Hottie Of The Day – Joshua Agai