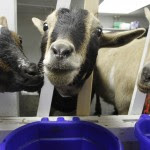 Lolzzz something similar happened in Naija!
Police in southern city of Chennai found scapegoats after their new patrol car is damaged.
Aljazeera.com has reported that Three goats were caught and detained by police in the southern Indian city of Chennai after they allegedly vandalised a new police patrol vehicle, the Times of India has reported.
The trio were held as “scapegoats” for the crime which reportedly involved a dozen of their tribe trampling over the car – the latest example of anti-social behaviour in the Kilpauk district of the city.
Police said the goats had a record of damaging vehicles of residents, but had “crossed the line” with an attack on a new patrol vehicle, a maroon Innova. “We got the vehicle two days ago,” said an officer on duty.
According to the complaint, about 12 goats dented the vehicle when they and climbed on top of it, “damaging the wipers and glass, and scratching the paint of the bonnet and body”.
Police however found only three goats in their subsequent inquiries. “We took the animals to the station and made inquiries about the owner,” the officer told the newspaper.
Their owner, Mary Arogynathan, 37, faces charges of negligent conduct of her animals, which were later handed over to the Society for the Protection of Animals.