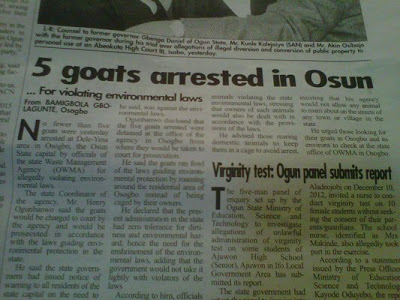 Lolzzz, Naija eh! – According to Punch Newspaper
Residents of Dele-Yesa area, Osogbo, Osun state were taken by surprise on Tuesday, when officials of the state Waste Management Agency, OWMA, arrested five Goats. The state Coordinator of OWMA, Mr. Henry Ogunbanwo stated that the goats were arrested for violating environmental laws.
The animals were caught roaming around the residential area of the state capital instead of being caged by their owners.
After being arrested, the goats were detained at the OWMA office in Osogbo.
They would be charged to court for prosecution, says the OWMA co-ordinator.
Prior to the incident, a notice of warning had been issued to all Osun state residents on the need to monitor their domestic animals so as to avoid public disturbance.
Mr Ogunbanwo further said “the present administration in the state has zero tolerance for dirtiness and environmental hazard, the environmental laws must be strictly adhered to”
He added that “OWMA officials would from now move to every nook and cranny of the state to arrest animals violating environmental laws. The owners of such animals would also be dealt with in accordance with the provisions of the laws.” 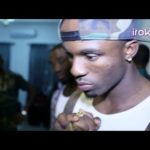