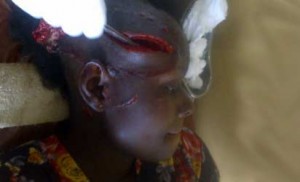 10-centimetre deep gash on Moyosola,s head.
POLICE in Ondo State are on the trail of an ex-police officer, Tajudeen Adeniyi, over an attempt to kill his wife, Moyosola, by macheting her, inflicting a 10-centimetre deep gash on her head.
The 38-year-old suspect took to his heels immediately he inflicted the injury on his wife who has  had four children for him. Adeniyi, according to investigation, has gone underground following the hint he got that the family of the wife had reported the incident to the Police. Consequently, the Police have combed the houses of his friends and family members to no avail.
Narrating her ordeal to newsmen on her hospital bed, yesterday, Moyosola said her husband abandoned the house for another woman since November 2012. She alleged that her husband invaded her apartment at Plaza area of Akure at about 11 p.m on Wednesday and attacked her.
According to her, the husband forced the door of the room open with the use of the mortar…..
and attacked her with cutlass, bottle and club.
She also alleged that her husband who was accompanied by two other men inflicted several  machete cuts on her head and neck, making her to lose several pints of blood.
Moyosola explained that after the husband abandoned her she took their four children to their hometown in Ogotun-Ekiti.
The doctor taking care of injured Moyosola, Dr. Matthew Adeyeri, told newsmen that she had about 12 centimetres cut on her head. He noted that it was sheer providence that she survived the attack.
According to him, “if the cut inflicted on the woman’s neck had been as deep as the one on her head, she would have died before getting to the hospital.
The state’s Police image maker, Wole Ogodo, said men of the command were on the trail of the suspect for attempted murder.
Culled From Vanguard