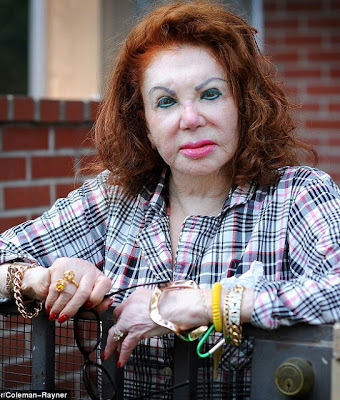 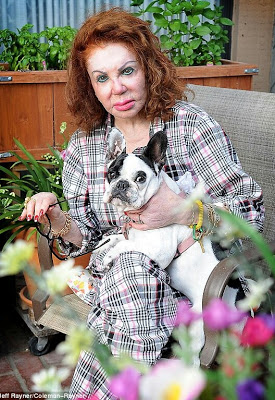 RAMBO star Slyvester Stallone’s 91 year old mum is someone you wont hesistate to glance at twice when you see her. She looks damn sexy for her age, wears mini skirts, short gowns and she made an everlasting oath not to quit cosmetic surgery.
We know some of YOU will say she looks scary bla bla bla but be sincere to yourself, does your grandma look like her?
When asked if she still uses cosmetic surgery,  this is what she said:

‘I do and actually I’ve got too much, I look like I’ve got a mouth full of nuts, it’s Juvederm (a cosmetic filler), too much of it. I feel as thugh I look like a chipmunk.’

‘It plumps [you] up here (pointing at her cheeks) but it looks like you have a mouth full of walnuts. However ‘I use a bag of spinach a day, every morning for breakfast I steam a bowl of it and boil an egg on it. That’s the secret to my longevity.

‘Who do you know that looks as good at 91? I am healthy. Here I am with a husband half my age, he’s 60.’I’ve had chemical peels, I’ve had three of those and about 50 injections. I’m all for everything to make it (you) look good – anything and everything.

But most of the plastic surgery in Beverly Hills is rotten. I have seen on TV and in person the biggest hacks. I will go to other states.’‘Just because it’s Beverly Hills and they do the stars, but do you see what the stars look like? They look like they’ve been struck by lightning don’t they?’I don’t have wrinkles in my forehead, I genetically don’t have that, that’s something I can be thankful for.’

Lolzz guess what she said about other hollywood celebs who’ve had plastic surgery?

‘You take Elvis Presley’s wife, doesn’t she look like she’s frozen in space and in time. Like a statue, frozen.’‘Did you ever see Bing Crosby’s wife Kathy Crosby? They took too much out of her eyelids and she looks basically like she’s got two headlights there.’

‘I think one of the best jobs is Joan Rivers. But they can’t seem to do anything for her body it doesn’t match the face. Her body is all-decrepit and she’s walking like she needs a cane. Her face even though it’s marble, I’d like to meet her doctor. I don’t know him but if I did I’d be there.