The special unit of the Imo State Police Command, “Police Ambush Squad,” has discovered a firearms depot at Udume Ogwa in Mbaitoli Local Government Area of Imo State. The suspects, Okechukwu and Donatus, who are brothers, were arrested at the depot during alleged negotiation to sell a pump action to a prospective buyer.
The Commissioner of Police, Mr. Mohammed Katsina, told Crime Watch that the prime suspect, Donatus, brought the illegal arms and ammunition from Turkey and that though they were licensed but that the licence of the arms had been revoked since 1982.
“It was through information that the Police Ambush Squad received that made them to storm his house and recovered over 13 pump action rifles; other assorted rifles seven hundred and fifty (750) live cartridges; One carton of security torchlights and a bullet proof jacket with the inscription, “Nigeria Police” and bearing the initials of the Imo State Police Commissioner,” he said.
CP Katsina explained that the weapons were recovered at house number 10, Oluwasunji Street, Ikotun-Egbe, Lagos State, while at the other suspect’s house at Udume Ogwa, pump action was recovered when it was searched by the police. CP Katsina said the suspect had been selling arms and ammunition illegally in Imo State and that he sold to most criminals in Imo State, who used the arms for kidnapping.
CP Katsina added that the special squad arrested Donatus’ younger brother, Okechukwu, who was selling the arms and ammunition in Imo State, “before we laid ambush and arrested his elder brother, who confessed that he brought the illegal arms and ammunition like hand luggage from Turkey when he was coming to Nigeria three years ago.
The suspect, explained his role to Crime Watch: “I brought the arms and ammunition from Turkey as hand luggage. I have the licence but since 1982 and I know that the Federal Government has embargoed the arms and ammunition. I kept these arms and ammunition in my house where my younger brother, Okechukwu, stole some of the arms and started selling them in Imo State.” 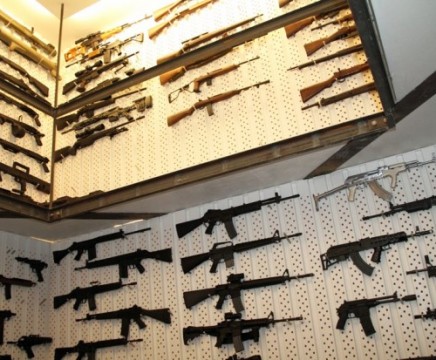 Donatus, who hails from Udume-Ogwa in Mbaitoli LGA of Imo State said the ammunition was kept in his house for three years until his younger brother stole them and started selling. “I live in Lagos State while my brother used to come from Imo State to steal them from where I kept them and started selling them at cheap price,” he said.
Okechukwu said he lived in Imo State and that he went to Lagos State to steal the ammunition and started selling each pump action at N250,000. “Some gang in Imo State have been buying the arms and ammunition from me, my elder brother, Donatus, brought them from Turkey to Nigeria.”
CP Katsina said in the history of Imo State, the police had never recovered such number of illegal arms and ammunition. “The command has reconstituted illegal arms mopping squad to deal with the high level of arms proliferation in the state.”
He said this was a warning to those who have such illegal arms and ammunition in their houses in Imo State and called on them to surrender them to the police headquarters in Owerri or face prosecution. He said the suspects would soon be charged to court.