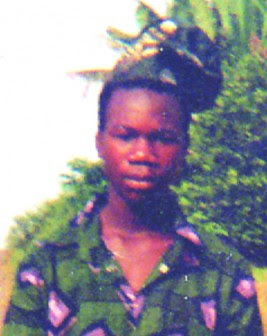 A 25-year old commercial motorcycle rider identified as Wasiu, is currently cooling his heels at the Ondo State Crime Investigation Bureau, SCIB, for allegedly beheading his friend, Joshua Fadeyi, 22, for money making ritual.
According to PM NEWS, Wasiu was arrested and taken to Oke-Igbo Police Station, and later transferred to SCIB, Akure for proper investigation. He allegedly confessed at the SCIB that a herbalist asked him to bring a human head for money making ritual.
Speaking on how it happened, Joshua’s uncle, Mr. Ademola Fadeyi, said they both came to his house on that fateful morning, ate and left at about 10am to drink palm wine at Oloruntade. He said after the palm wine drink, they went to the home of Samuel, one of their friends, at about 6pm,…..
………..where Wasiu perpetrated the evil act.
He said Samuel returned home after Wasiu had killed Joshua and was cutting off his head with cutlass. He told P.M.NEWS further that a struggle ensued between Samuel and Wasiu and Wasiu tore Samuel’s clothes and escaped to a neighbouring village to evade arrest.
He was later arrested a few days later at Epe village in Ondo by commercial motorcycle riders who were on his trail after the incident happened as he was about to buy cigarette. The late Joshua’s uncle accused the SCIB of trying to cover up the matter, adding that what the family want is justice.
He pleaded with the police to release his corpse which is currently at the General Hospital, Ondo Town, to the family for burial. When a call was put through to the DPO of Oke-Igbo Police Station, Akure, to seek clarification on the issue, he said: “when the guy was apprehended, the mob wanted to kill him. But when I intervened, they descended on my car and demaged it.
“Well, the matter is no more at my police station. We did not take any statement from him when he was here. He has been transferred to SCIB. You can get all the information you need from the Ondo State PPRO,” he said.
Speaking with P.M.NEWS on phone on the matter, an inspector at the SCIB, identified as Abayomi, said:”you as a journalist, can you believe that case that is already before the court of law can be covered up?
“Well, you can’t get my own side of the story except you get across to the Ondo State PPRO. Thank you.”