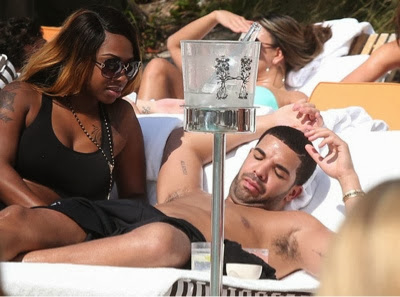 Lol, so this groupie had a one night stand with Drake and she decides to get her 5 minutes of Fame lol…Hmmmm so we all know Drake enjoys BJ’s more than sex…..
I met Drake after he did a show on the Lil’ Wayne tour in Memphis, TN. They were staying downtown at a mediocre hotel and me and a group of my girls just so happened to have a friend working the front desk so we knew where they were at.
We were at the bar having drinks figuring they would be in after the concert around 11:30. Sure enough Drake walks in with some girls (who I believe where the dancers) and the some other short dude whom I assumed was Jas prince son of rap-a-lot owner. So we kind of flirted and got his attention and they came over to the bar and was like what’s up with ya’ll, ya’ll from around here?
We said no we just go to school at Langston but were from Vegas. They were like well you want to come up, we can chill and drink up there. So we were like okay.
We get up to the room and everyone is talking and having fun and all of a sudden Jas grabs my girl and was like yo we’ll be back.
So I’m sitting there with Drake and he was like come closer come up on the bed. I’m like wow can I get comfortable first I barely know you. . . So we kissed for a bit and then he was like you know what would really turn me on..I’m like what’s up talk to me..he was like some head..I’m like well that’s not really my thing and I thought to myself this might can be continuous thing so fuck .
Then I thought I can’t break up a happy home, and I asked him isn’t your girlfriend Bria Myles, he’s says no that was a Lil fling but its way over now . So I say ok, let’s get it. Girl let , me tell you when he pulled it out. GOD DAMN.
Who said light skinned dudes weren’t in. I was locked in, as Diddy would say, on him. I figured he’s like 6’2 I so he has to be holding something and lord he was. It was like some porno shit I swear, they could mold that thing and sell it in stores.
So I break him off for like 5 mins and then that was it. I guess he’s one of those dudes who enjoys head more than sex I was like wow I wanted to do more but it was okay cause the look on his face was priceless. He was really sweet though and was like maybe we’ll see each other again. If you ever in Toronto hit me up.
We exchanged numbers, I called my girl and we left. Overall 9 out of 10 even though we didn’t go all the way, but his personality and passion was out of this world. I pray he’s stays single for a while cause any girlfriend he has is definitely going to catch hell.

Stella Oduah no brain, no beauty, no conscience! – By Toyosi Akerele