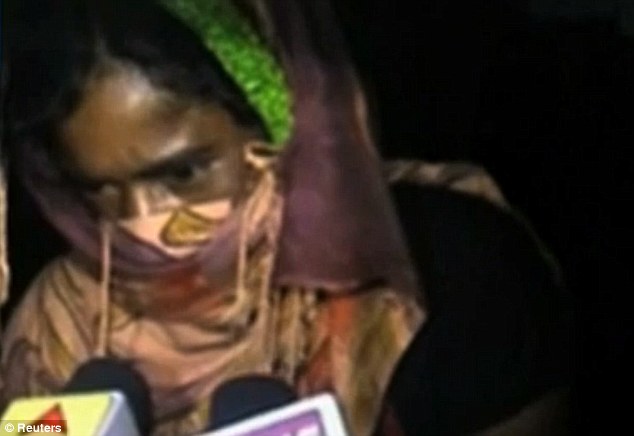 A 20-year-old woman has been left fighting for her life in hospital today after a kangaroo court in India ordered her to be gang-raped for having an affair with a youth from another village. The brutal punishment was allegedly carried out by the very same ‘court’ which found her guilty in a village near Suri in west Bengal state, 150 miles from Kolkata. Police said that all 13 accused men – ten of whom made up the kangaroo court – have since been arrested for rape. Among them is the village headman.
Despite her critical condition and clinging to life, the female victim managed to tell her story to The Times of India.

‘I had an affair with a man,’ she told the paper.

‘We were dragged to a gathering where our community headman was present. They told me to pay 50,000 rupees (£490). When I said I couldn’t, they brutalised me.’

See the picture of the animals who gang raped her when you continue!

A doctor told the paper that the young woman was alive ‘only because she is a tough tribal girl.’ 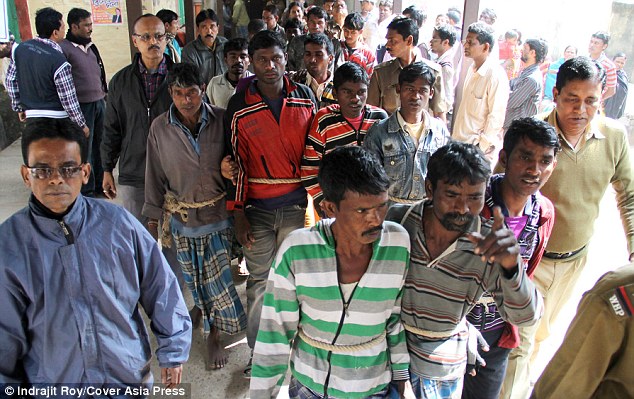 She added: ‘They tortured my daughter and dumped her home late at night. We were threatened not to go to police. ‘We tried to go to Bolpur hospital, but they stopped us.’
It was on Monday afternoon that a group of tribal men found the woman sitting with her lover, who is from Chowhatta village and of a different religion. They dragged the two of them to a religious place known as a ‘than’ where a makeshift court was hastily put together on the orders of the tribal chieftan.
Police said that the youth was told to pay a fine of £245 and warned that if he did not pay, men from the village would ‘have fun with the girl.’ With no money forthcoming, the woman was allegedly tied to a tree before she was forced into a shed and raped continuously until Tuesday morning. 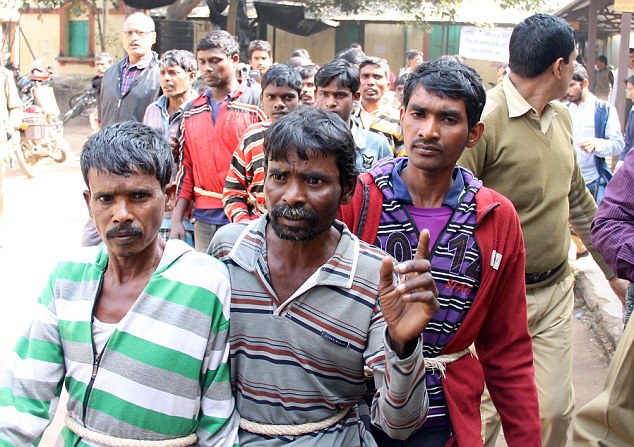 The woman’s family were forced to remain indoors throughout Tuesday, doing their best to care for their daughter who was bleeding from severe injuries.
According to the Times of India, the family managed to slip out late on Wednesday afternoon and take the woman to a health centre, where doctors said she should be taken immediately to the nearest hospital.
But from that hospital she was shifted on to Suri hospital in a critical condition at night.
‘This is when the crime came to light,’ said police officer Prashanta Chowdhury. ‘She was gang raped and the details are yet to be investigated.’
The shocking incident is not the first time that a woman has been punished for having an affair in the area.
Four years ago a teenage girl was stripped and forced to walk naked through four villages, during which hundreds of people molested her and mocked her.
They even filmed her with mobile phones, which resulted in police moving into the area and making arrests.
The girl received a bravery award from Prime Minister Manmohan Singh and today she lives in a state-run welfare home.