A major sex scandal has enveloped three prominent South West families – and if not well handled, will not only injure their reputations, but may even consume some lives. Yes! The situation is that bad. In fact, it is so odious. Which explains why their parents have been running helter skelter and doing everything within their power to ensure that the matter doesn’t get messier.

The families involved are from Ile-Ife, Osun, Ikorodu, Lagos and Ibadan, Oyo States. All socialites and big time businessmen, one of them was at some point a Minister of the Federal Republic. Alphabets D,A,B begin their popular surnames. Shoga, one of the major actors, was caught sleeping with his best friend’s wife, Biodun.

Meanwhile, the said Biodun is also very close to Esther, Shoga’s wife. On how the cat was let out of the bag, a source told YES International! that Bankole, husband to Biodun, was at home with his wife gisting and jiving until Biodun excused herself to go freshen up. Not long after she went into the rest room, her phone rang. Her innocent husband picked it and what he saw on the screen was SH – that is, Sweet Heart. Wondering who his wife could be referring to as such, he took a closer look at the number and discovered that it was his friend; not just his friend, but his closest friend, Shoga.

Quickly, he swapped his SIM with his wife’s. And as if on cue, text messages, both shocking and shameless, started flooding his phone. When he couldn’t take it any longer, he dialed his friend’s number. But thinking that it was his secret lover, the man began telling the ‘woman’ how much he’s missed her and how he can’t wait for her to meet him at their love haven.

Unable to take it any further, the man started hurling curses and abuses at his friend, who instantly, cut him off. Seething with rage, he pounced on his wife, beating her blue and black as soon she emerged from the shower room. The commotion from their home attracted some neighbors who first rescued her and thereafter rushed her to the hospital.

Their parents were alerted and soon they all converged on the couple’s residence in one of the highbrow areas on the Island. After being entertained with the sordid details of their children’s sexcapades, they resolved that they all jet out of the country to cool off first. Even though Bankole is still insisting on divorce or nothing. Shoga, of course, has since vamoosed. Biodun, interestingly, has a fashion designer sister whose marriage crashed after she was also caught engaging in extra marital affairs. The story, no doubt, is still unfolding. And we shall keep our ears wide open so as to constantly keep you updated. 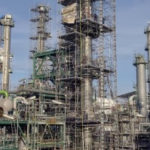