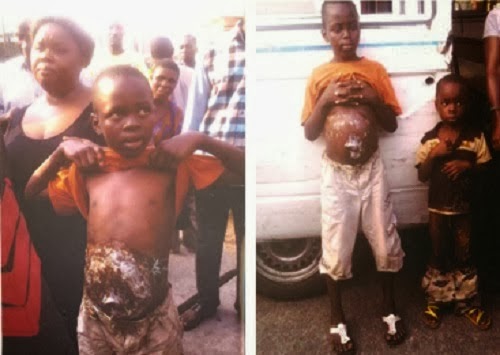 The two women were arrested at Ajose Adeogun Street, Victoria Island recently while begging with two kids, aged six and nine years. The stomach and legs of the kids were plastered with ointment and wool to give the impression that they were suffering from serious burns to attract public sympathy.
An Environmentalist, Betty Albert, was driving by and saw the gory sight of the nine-year old boy lying on the ground and decided to assist the victim.
She parked her car and came out and told Chioma that she should be allowed to take the boy to the hospital.
On hearing this, Chioma asked the boy to run away which he did, but unfortunately, he was caught by a policeman who was on duty nearby. The Environmentalist asked the policeman to chase after the boy and he was caught and brought back to the scene.
“I asked the boy whether something was wrong with him and he said he was okay. I asked him whether I could remove the plasters and wool on his stomach and he said yes. So I removed them and found out that the boy was alright.
“The boy told me that his younger brother was at Eko Hotel with another woman also begging for almsand that they should help him to get the boy. The boy was brought with the other woman,” Betty explained.
The boy’s leg was also plastered with ointment and wool to deceive people that he had been badly burnt and needed help.
Investigation revealed that Chioma Eze, from Anambra State, had gone to Awka and told the children’s parents that she wanted to assist them send the children to school in Lagos and she was allowed to take them. But unknown to the parents, their children were brought to beg for alms in Lagos.
Betty had been following the case or almost two weeks to ensure justice was done.
The women were arrested by police from Bar Beach Police Station, while the case was later transferred to Adeniji Adele Police Station.
The case was again transferred to the State Criminal Investigation Department, SCID, Panti, Yaba where it was charged to court on Wednesday.
According to Betty, the in-law of one of the women had been threatening her life because of the way she had pursued the case, alleging that the in-law to Chioma said he had marked her face and would ensure that she was eliminated.
The Lagos State Office of Youth and Social Department has been following the case and has expressed disgust at the way the children were ill-treated by the women.
Special Adviser to the Governor on Youth and Social Development, Dr. Dolapo Badru, said it is lamentable that Anambra State had continued to be a place where people were brought to Lagos to beg for alms.
“How can these women be so callous to have brought these children from Anambra State to beg foralms in Lagos? They even make the children feign injury and they don’t have homes in Lagos and now they will say we are deporting their people.
What we are saying is that these are things the public won’t know,” he stated.
He said Lagos “would not tolerate a situation where Anambra State would continue to infest the state with beggars and later cry wolf that we are deporting people that
have no homes to stay in the state.”
The women, Amarachi Eke from Imo State and Chioma Eze from Awka in Anambra State, sourtheast Nigeria, were arraigned at the court on Wednesday on a two-count charge of using underaged children to beg for alms. And they pleaded guilty to the charges.
Magistrate Y.O. Aje-Afunwa sentenced them to two months imprisonment each; one month for each count charge and they are also to pay a fine of N5,000. The jail terms will run concurrently.
Source –  Pm news 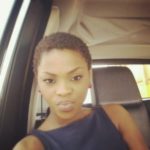 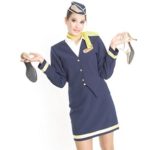