Money running into billions of Naira seem to be missing everywhere in Nigeria these days. Yesterday, the House of Representatives uncovered a fresh missing N35bn in the Office of the Head of Service of the Federation.
According to the reps, the office of the HOS could not account for the money which it collected from the Service Wide Vote within nine years.
A report from Punch when you continue
More revelations by the House of Representatives Committee on Public Accounts indicated on Thursday that the Office of the Head of Service of the Federation could not account for N35bn it collected from the Service Wide Vote within nine years.
While the records of the Budget Office of the Federation showed that the OHSF received N52bn between 2004 and 2012, the Permanent Secretary, Mr. Remi Adelakun, admitted only N17.6bn.
The committee, which is chaired by Mr. Solomon Olamilekan, insisted on Thursday that Adelakun must explain how the N35bn was spent.
At Thursday’s session, the permanent secretary and officials of the budget office had disagreed over how much the latter released to the OHSF.
The records of the budget office showed that in 2004, the OHSF received N2.7bn; N9.8m in 2005; N701.7m in 2006; N896.3m in 2007; N5.3bn in 2008 and another N612.9m; and N70m in 2009.
For 2010, the figure was N17.6bn; in 2011, it was N13.6bn and N8.5bn in 2012.
However, the OHSF admitted the N17.6bn released in 2010.
Olamilekan ruled that the permanent secretary must produce documents on how the balance of over N35bn was utilised within two weeks.
In a separate case, the committee directed the Central Bank of Nigeria to refund the N1.015bn it spent in 2007 to print 65 million ballot papers for that year’s presidential election.
The committee stated that there were “double payments” for the ballot papers, which it said the bank could not explain adequately.
Although the Director, Corporate Services, CBN, Mr. Dipo Fatokun, who represented the bank, denied the alleged double payments, the committee insisted that the bank made contradictory submissions.
Fatokun said, “There was no double payment. When we first appeared before the committee, we did not check our records very well and that was why we thought there were double payments.” 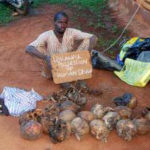