Connect with us
The mastermind of last Thursday’s attempted jailbreak at the Abakaliki Prisons in Ebonyi state has been at the facility since 2007 awaiting his trial. 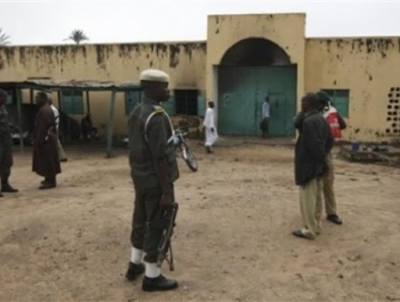 Controller-General of the Nigeria Prisons Service NPS, Ja’afaru Ahmed announced this in a statement issued in Abuja.

Prisons authorities did not immediately give further details about the ring-leader including his name, offences and whether he was among the inmates killed in the crossfire.

Built in 1946 with an installed capacity of 387 inmates, the Abakaliki Prisons had 920 inmates as at Thursday. Of the figure, “811 are awaiting trial prisoners leaving just 109 as convicted inmates.
The ring leader had in fact, spent about nine years awaiting trial,” he said.

How the incident happened

In the statement signed by the Service Public Relations Officer, Francis Enobore, the CG also gave an insight as to the circumstances leading to the attempted jailbreak.

While he confirmed that no prisoner escaped during the incident, the Controller General, who inspected the prisons stated that trouble started when prisons officials were about to carry out routine cell-search in the morning but the inmates in a particular cell resisted the exercise.

They suddenly became riotous, broke other cells and released the inmates. They eventually broke into the workshop to arm themselves with dangerous weapons and severely attacked some staff trapped in the yard while others made for the main gate and pulled it down”, he explained.

According to him, the prisons armed squad and men from other security agencies on guard outside the perimeter fence were firing warning shots to deter the rampaging inmates but a number of them rushed out to escape. Ahmed said

“the bold attempt was resisted by the combined team of armed personnel who prevented what would have turned into a catastrophic security situation had the inmates succeeded in escaping.” At the end of the confusion, no fewer than six inmates were killed while 10 were injured. Six prisons officers who were injured are said to be currently receiving treatment alongside the inmates. “Regrettably, at the end of the fracas, six prisoners died and 10 others were injured. Six prisons officers were severely injured. However, both staff and inmates are responding to treatment with some already discharged from the hospital. “The Controller General has set up a three-member panel to carry out a detailed investigation into the incident in order to establish both the immediate and remote causes of the riot.

I Met My Husband On Facebook, But After Our Marriage I Discovered He Bed Wets, Has A Secret Phone