Tyler Perry made a surprise confession the other day. During his recent appearance at the Women’s Empowerment 2014 event in Raleigh, North Carolina, he revealed his anger after discovering that he was not the biological son of the man who had raised him.
The writer and producer admitted that he was hurt and disappointed that his late mother had lied to him about his father’s identity for most of his life.

“I love my mother to death, but she lied to me,”

The 44-year-old star went on to confess that believed the violent bastared Emmitt Perry Snr who raised him was not his  biological father because he was so abusive to him.
His mother always claimed the man was his father but when his mother died, Tyler took a DNA test with his brother and found out the don’t have the same father. He then took a test with the abusive man who raised him and the test confirmed that the man who caused him so much pain was not his real father.
The regular beatings, which were so severe that he would black out, led him to attempt suicide at the age of 10.

“His only answer to everything was to beat it out of you,” Perry  once said.

Perry, who is now searching for his true father, concluded his talk by encouraging event-goers to be honest with their children.
“Some of you have secrets that your kids need to know,” he said. “Let the chips fall where they may. For the peace of that person, let them know.”
Wow. Makes sense though, because one would have to be a complete monster to abuse their own flesh and blood. 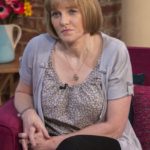