44-year-old Julius Iyenakpe was said to have slumped and died while making love to a yet-to-be identified woman in a hotel in Benin. Iyenakpe, a father of three and a furniture maker by profession, Julius hailed from  Agenebode, Etsako East local government area of Edo state.
According to family sources, the deceased hurriedly left home, after he refused breakfast prepared by his wife, but ended up in a hotel with his mysterious lover, on Obanor Street, off Dumez Road‎.
The hotel staff discovered the lifeless body of the man after they knocked at the door of the room after the man had stayed longer than the one hour he booked. The woman had absconded and only the lifeless body of the man was found on the bed.
It was gathered that a packet of sex-enhancement tablet, Viagra was discovered in the man’s pocket.
‎Men of the Ugbekun police division who collected his body, also took his Toyota Pathfinder SUV, his mobile phone and a cheque of N20 million issued by one of the palm oil companies in the state.
Mrs. Iyenakpe said she was told about her husband’s death, when she called his number. A woman answered the call and told her the husband had gotten an accident. She was told to report at Ugbekun police station.
Edo state police commissioner, Foluso Adebanjo, confirmed the death of the man to journalists on phone.
Eight days ago, a 70-year-old man died in an hotel, also in Benin while making love to a married woman. 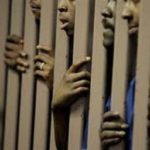