Search
Menu
Search
Pharrell Williams gives one of his most provocative interviews on topics ranging from women to racism, in the November issue of EBONY magazine.

In honor of the annual Men’s issue, the producer and co-judge on the NBC hit series, The Voice, speaks candidly about how the tragic death of Michael Brown in Ferguson, Mo. impacted him as a Black man, husband and father. Williams’ shares:

“I don’t talk about race since it takes a very open mind to hear my view, because my view is the sky view. But I’m very troubled by what happened in Ferguson, Mo.”

“When things like that happen, we need to be a united cell. We need connective tissue to be linked by spirit and spirituality.”

“For every individual who gets killed, someone should build a school or teach a child. We really need to balance things with positivity” Williams also hits on personal controversy. The Virginia native addresses the rumors surrounding his bias against Black women, which sparked when the cover for his latest album, Girl, showcased only non-Black females.

The issue also explores several other profound, discussion-worthy topics. EBONY magazine’s special report, “Dirty Little Secret,” features a riveting expose on the sex trafficking industry, how it affects young Black girls, and how readers can get involved as chronicled in the last installment of the Saving Our Girls series.

“You’re being raped, you’re being beaten and you’ve been kidnapped,” said Keisha Head as she shares her story with at-risk girls and those who have been trafficked.  “Every night, a different horrific thing is happening and you’re escaping with your life,” she added.  Head now works with organizations such as youthSpark, which seeks to end sex trafficking.

Check out the behind the scene video at Ebony.com 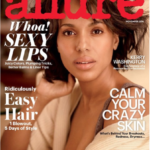