Menu
At least 27 people have been killed, including foreigners, in an attack on a beach near two tourist hotels in the Tunisian resort town of Sousse, according to the interior ministry.
Officials say one gunman has been shot dead and another is being pursued.

Sousse is a popular tourist destination.

Tunisia has been on high alert since March when militants killed 22 people, mainly foreign tourists, in an attack on a museum in the capital Tunis.

The interior ministry told the BBC “a terrorist attack” was ongoing.

A British man on holiday told the BBC that he heard the attack on a neighbouring hotel and saw a man with a pistol from his room, but did not know whether this was an attacker or a member of the security forces.

The holidaymaker said he and other guests had been told to take shelter in the hotel’s staff quarters and have been told to wait for the all-clear.

One image circulating on social media appeared to show a man lying face down in the sand with what looks like blood around his head. 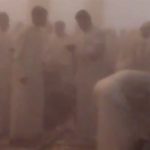