Menu
Game Of Thrones fans were left distraught on Sunday night as the season five finale proved to be one of the most bloody spectacles the HBO series has produced so far.

The Lord Commander was brutally butchered by his fellow brothers of the Night’s Watch, but he was just one of many to die.

Viewers had already been reeling at the sight of Cersei Lannister moments earlier being shorn and stripped completely naked, before being forced to march through the streets of King’s Landing in front of a baying mob. The explosive season five finale jumped from one shocking scene to the next, also seing Stannis Baratheon executed at the hands of Brienne of Tarth, just hours after his wife Queen Selyse hanged herself

In an episode that had an even higher main character body count than the infamous Red Wedding, Myrcella Baratheon was poisoned to death and the hands of Ellaria Sand, while Arya Stark slaughtered Ser Meryn Trant in one of the series’ most gruesome ever murders.

The astounding episode opened at Stannis Baratheon’s camp, when a smug Lady Melisdandre claims last week’s horrific sacrificial burning to death of his daughter Shireen to appease the Lord of Light has worked, as the snows hampering his march on Winterfell are melting.

But Stannis is hardly overjoyed, and he doesn’t get any happier when a soldier arrives with news that half his army have deserted him, and taken all the horses, in the wake of the brutal sacrifice.

Then a second soldier leads him to the woods to reveal the ghastly sight of wife Selyse hanged from a tree; as he surveys her grim corpse a third soldier informs him Lady Melisandre has been seen fleeing the camp. Despite the three crushing successive blows, the ever-stoic Stannis insists they press on to Winterfell.

Back at the Wall, Jon Snow is reporting to Sam what he witnessed at Hardhome when the White Walkers and their army of the dead annihilated Brothers and Wildlings alike.

‘He raised his hands and they all stood up at once. Tens of thousands of them – the biggest army in the world,’ he somberly reports. ‘I hope they don’t learn to climb the Wall.’

He tells him the dragonglass they brought was lost, and although they now know Valyrian steel can kill the Walkers too, they concede there are too few blades left in Westeros to matter.

‘The first Lord Commander in history to sacrifice the lives of sworn brothers for the lives of Wildlings,’ he tells Sam. ‘How does it feel to be friends with the most hated men in Castle Black?’

Sam begs Jon to allow him, Gilly and and baby Sam leave for Old Town where he can train to become a maester – and also because he knows the three of them will likely be killed by the Brothers if they remain at Castle Black.

‘The last thing they’ll see is me failing them – I’d rather see a thousand White Walkers than see that,’ Sam says, and Jon agrees to let them go – but not before joking about Sam’s heavily injured sex scene with Gilly.

‘I’m glad the end of the world is working out well for someone,’ he joshes with a rare smile.

Meanwhile at Winterfell, Sansa uses the confusion in the preparation for Stannis’s arrival to sneak to the broken tower and light the candle to signal Brienne that she needs help.

But Miranda intercepts her on the way back, seemingly tipped off by the accompanying Reek, and holds Sansa at arrow point, telling her Ramsay will only keep her to bear children before he kills her.

‘If I’m going to die, let it happen while there’s still some of me left,’ Sansa defiantly replies, and just as Miranda is about to loose the arrow, Reek pushes her and she falls from the battlement to her death in the courtyard below.

The sound of Ramsay returning spurs the two of them to flee, and the only way out is over the wall. Reek takes her hand and they make the leap, and even with the thick snowbank below it looks like an impossible height to survive from.

Meanwhile outside the walls, Pod has spotted Stannis’s army approaching and warns Brienne, who leaves just before she sees Sansa’s signal.

A tired looking Stannis arrives finally arrives within sight of Winterfell – without horses, siege weapons and less than half his army – and begins to prepare for a siege.

‘There’s not going to be a siege your Grace,’ his captain tells him and points to the massive mounted Bolton force charging at them from the castle. Stannis has no choice but to draw his sword and meet them, even though he is hopelessly outmatched.

In the aftermath of the battle, a heavily wounded Stannis is making his way through the scattered bodies of his army when he comes across two Bolton men, finishing off those still breathing. Stannis somehow manages to kill them both but has his achilles tendon slashed in the skirmish and falls to the ground.

It is then he meets to only less welcome sight than a Bolton.

‘Bolton has women fighting for him now?’ he asks her, but she identifies herself as Brienne of Tarth.

‘I was kingsguard to Renly Baratheon. I was there when he was murdered by a shadow with your face,’ she tells him before sentencing him to death. ‘Any any last words?’

Meanwhile across the Narrow Sea we see Ser Meryn Trant is following up on his perversions at the brothel, cruelly whipping three young girls with a cane. While the first two scream in pain, the third doesn’t make a sound, even when he breaks the cane across her back and then punches her in the gut and she crumples to the ground.

But when the girl looks up her face has completely changed – to Arya Stark’s. She leaps at him and gouges out his eye with a short blade, falls on him and pierces his other eye, before mercilessly stabbing him over and over in the chest. ‘You’re the first person on my list, you know,’ she tells the blubbering mess, recalling her water dancing tutor he killed in season one. ”For killing Syrio Forel, remember him? Probably not.

‘I’ve gotten a few of the others. The Many-Faced God stole a few others from me… but I’m glad he left me you. Do you know who I am?’ she calmly asks, as the Kingsguard bleeds and pleads on his knees.

‘You know who I am. I’m Arya Stark. Do you know who you are. You’re nothing. No-one,’ she says and slowly slits his throat.

In the next scene we see Arya replacing the face she borrowed from the House of Black and White – but Jaqen H’ghar has seen her.

‘A girl has taken a life. The wrong life,’ he tells her. ‘That man’s life was not yours to take. A debt is owed. Only death can pay for life.’

The Faceless Man then unveils a vial of poison – and drinks it himself. He falls to the ground dead as Arya shrieks in dismay. But suddenly another Jaqen appears behind her. Confused, she reaches for the dead man’s face and pulls it off to reveal another… and another, and another.

She continues to pull off his changing faces – until she reveals her own. And then the corpse’s face begins to blur. When she turns to look to Jaqen for an explanation, she finds she is completely blind. The action then jumps to Dorne, where Prince Doran, Ellaria Sand and the Sand Snakes are seeing off Jamie and Myrcella Lannister, the prince’s son Tristane, and Bronn – whom Tyene Martell has a few choice words of farewell to whisper.

Find loads of pictures and more over at dailymail. 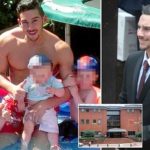 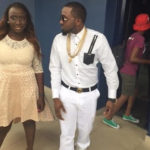