Although, Dokpesi’s bail conditions were very stringent as the conditions put forward by the court was very strict. The Edo-born high-chief will be remanded in FCT Prisons Kuje until his bail applications are met.

This is what Justice Kolawole said while granting Dr Raymond Dokpesi bail. The judge explained in detail how he arrived at his judgement for over 1hr 30 mins.

1. He granted Chief Dokpesi Bail but with conditions… The conditions for bail are N200 million each (N400m) by two sureties, the first surety must be a director of civil service or retired as such under pension. He must also present a letter by his boss to show same.

The second surety may be an independent entrepreneur but must present evidence of tax payments for the last three years. The sureties must also submit their passports to the court.

The judge also affirmed that the sureties must also sign a means that if the accused jumps bail, they will stand in for him.

2. He put the EFCC on notice that he was already looking at some errors in their case and warned them in advance.

For instance he wondered how they intend to prove that Dokpesi laundered govt money when he was charged alone…since he is not a govt employee.

He also wondered how they could have asked him to deny Dokpesi bail because “the issue was one of national security which related to the diversion of money meant for arms, which led to the deaths of soldiers” when in the 6 count charge NOTHING of the such was mentioned.

3. He asked the lawyers to file an application for the media houses who have been leaking confidential documents about the case and promised to make an example out of a few to deter others.

4. He was unequivocal when he mandated that on no grounds should the EFCC re-arrest Dokpesi on any other matter while on bail. That he knows their (EFCC) rascality and he is putting them on notice that if they need Dokpesi, they should invite him by writing through his lawyers and give 48hrs notice. Dokpesi can only be questioned between the hours of 10am and 6pm and that should not be abused. If they want to question him outside these hours they should write to the court specially.
Finally, he was crystal clear about how keen the courts are to fight corruption, but stressed that it would not make any sense to attempt to do so through corrupt processes.

The case was adjourned to February 17, 2016 for the commencement of trial

Chairman of DAAR Communications Plc, Chief Raymond Dokpesi, was on Wednesday, December 9, arraigned by the Economic and Financial Crimes Commission (EFCC) before a Federal High Court in Abuja.

The Peoples Democratic Party (PDP) stalwart who is standing trial for a six-count charge of money laundering and other fraud related charges was arraigned on, December 10 by the Economic Financial Crimes Commission (EFCC).

According to the charge, Dokpesi is alleged to have received about N2.1billion from the office of the National Security Adviser, NSA, for PDP’s ‎presidential media 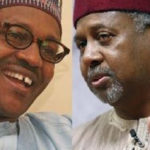