Search
ADD POST
Menu
Search
The identical Indianapolis trio whose selfie took the Internet by storm told the Daily News that mother Tina Brown, 35, is the woman on the left, followed by her 16-year-old twin daughters Kyla and Kaylan Mahomes, respectively.

“I am the one in the black blazer on the left,” said Brown, laughing. “We didn’t really expect a random picture from when I was picking up the girls from school would lead to all this.”

Kaylan posted the photo labeled, “Mom, twin and me” on Jan. 28, and the captivating snap took social media by storm as web users tried to tell the trio apart. The indistinguishable snap was retweeted more than 19,000 times and counting, and received more than 31,000 likes.

“My sister and I have lunch periods back to back,” said Kyla, “and there was this one time that one of my teachers thought I was cutting class when I went to lunch, because she had just seen my sister in the cafeteria.”

Brown credits eating fruits and vegetables, exercising and drinking lots of water for her youthful looks.

“I don’t use special soap on my face, just plain water or facial cleanser, and that’s it,” she says.

And the girls hope to take advantage of their newfound fame to score scholarship money for college, as they both dream of being pharmacists.

But they’ve also got their eyes on careers in pictures, of course.

“We want to do some modeling on the side, modeling clothing and doing things with skincare, and acting jobs,” said Kaylan. 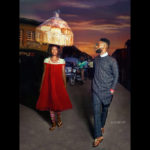