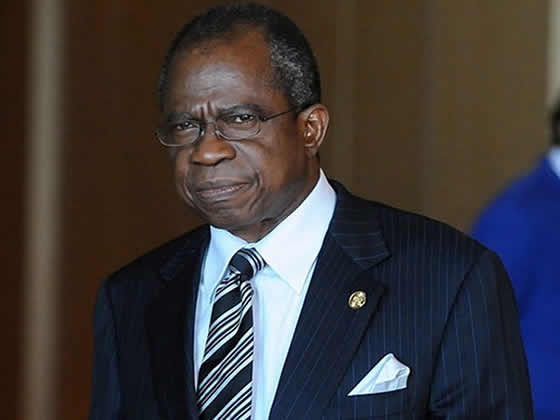 He was born on May 6, 1945, in Abia State
Maduekwe was appointed Culture and Tourism minister by President Olusegun Obasanjo in 1999, Minister of Transport in 2001. As Minister of Transport he got the nick name ‘Ojo oni Keke’ for advocating for the use of bicycles, although critics said that the roads were unsafe for cyclists and Maduekwe himself was pushed into a ditch by a bus while he was cycling to work.
Chief Ojo Maduekwe was also appointed Foreign Minister of Nigeria on July 26, 2007 by President Umaru Yar’Adua. He left office in March 2010 when Acting President Goodluck Jonathan dissolved his cabinet.
He was National Secretary of the ruling political party, the Peoples Democratic Party (PDP).
More details about his death soon…
Here are some of the things worthy of note about the late three-time minister:
1. He was Born on May 6, 1945 in Abia State, Nigeria.
2. He was a native of Ohafia, Ohafia LGA of Abia state.
3. He obtained a degree in Law from the University of Nigeria Nsuka in 1972
4. He became a Member of the National Assembly (Second Republic) in 1983
5. He worked as Minister in the Federal Minister of Transport from 2000 to 2003
6. Ojo Madueke was Nigeria’s Minister of Foreign Affairs from 2007 to 2010.
7. Before then, he had a brief stint as the Culture and Tourism minister under the President Olusegun Obasanjo in 1999.
8. Madueke Was the first Cabinet Minister to design and create an Anti-Corruption Unit as Transport Minister 2000-2003, 3 units which became the model for other Ministries and Government Agencies.
9. As transport Minister, he began and concluded the First Railway Master plan for Nigeria to span over a period of 25 years.
10. He also helped Nigeria to get on the International Maritime Organisation White List without which the entire Maritime Sector would have grounded.
11. He was a Ruling Elder at the Presbyterian Church of Nigeria
12. He was a Paul Harris Fellow of the Rotary Club International
13. He was a member of the Nigeria Bar Association
14. He was an Associate Member of the American Bar Association
15. He was a memmber of the International Bar Association
May his soul rest in peace.