Menu
In what would come across as a really shocking development, a mob has attacked and cruelly murdered two men over witchcraft. 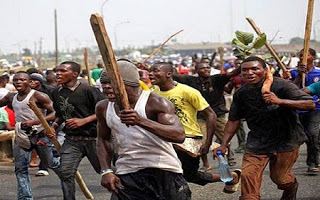 The two men were killed and their bodies set ablaze by a mob over the death of  a member of the community, Bassey Effiom.

According to Vanguard, the two men, Chief Bassey Ekwe, 69, and Mr Asuquo Effiong, 72, met their fate following instruction from a herbalist allegedly invited to the community to find out the cause of the death of Effiom.

Obori Bassey, son of one of the slain men, Bassey Ekwe, narrated the events that led to the killing of the elders:

“The whole issue started when Effiom died and some villagers said his death    was mysterious; so they   invited a native doctor to find out the cause of the death.  The native doctor   told them it was my dad and Asuquo who killed the man through witchcraft”


According to him, the native doctor, holding a live cock, led some residents who carried the corpse on their shoulders    on a parade round the village while pouring libation and invoking the spirits of the dead.

“On getting to our compound, they started dancing and my father, who didn’t know what was happening, came out and curiously asked what was wrong only for the native doctor to point at him and said he was one of the persons who used witchcraft to kill Effiom”.

The son narrated that the villagers accompanying the native doctor immediately pounced on the old man and hacked    him to death and went ahead to set him ablaze.

The herbalist, currently in detention at Cross River State Police Command Headquarters, Diamond Hill, Calabar, told  Sunday Vanguard that he only went for the burial of Effiom, who was his in-law when the cock was given to him by some villagers and that he never made any accusation against anyone, neither was he part of the mob that killed the men.

“I was given the cock by some of the villagers and I was on my way home at about 10 am when the police held me that I was a herbalist and had caused the killing of people”, he told Sunday Vanguard.

Mr Jimoh Ozo Obeh, Cross River State Police Commissioner, said the man will appear in court soon to answer charges related to stirring up a mob to cause murder. 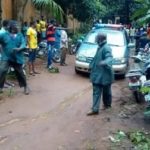 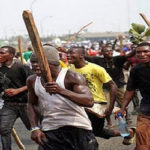