Search
Menu
Search
In what will come across as a really shocking development, protesters have taken over the palace of a traditional ruler with a corpse. 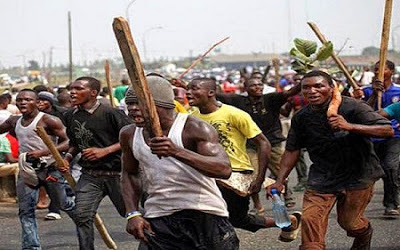 Complete tension took over Iwo community in Osun State, today when some aggrieved persons stormed the palace of the Oluwo of Iwo, Oba Abdul-Rasheed Akanbi.

They stormed the palace with a coffin to stop an ongoing installation of a new chief inside the palace.

In Yorubaland, it is a taboo for an oba to see a corpse. The form of protest had shocked many indigenes of the town, who believed the aggrieved persons ought not to have gone to that extent.

More deets when you continue………

According to The Punch, the monarch was conducting installation rites for the candidate of Aro Bode Compound known as Paje.

Some residents of the town said Paje was a known leader of the ruling All Progressives Congress and was also qualified to occupy the seat of Aro, one of the most powerful kingmakers in the town.

But as the installation was underway, protesters from Aro Olukotun Compound stormed the palace with the corpse. The corpse was put inside a coffin and was carried to the palace gate atop the roof of a Nissan Primera car.

The palace gate was shut when the protesters arrived and this prevented them from getting inside the palace court where the installing rites were being conducted.

Policemen, it was gathered, promptly took charge of the situation and persuaded the leaders of the protesting family to take away the corpse from the palace.

The monarch, who was said not to be perturbed by the antics of the protesters, later came outside the gate of the palace and addressed his subjects.

The Oluwo, when contacted, told The Punch that the issue had been resolved and the protesters had since left.

The monarch said he did not favour any family but followed the traditions of the town regarding the selection of the Aro.

Akanbi said, “There are two families qualified to produce the Aro. The family of the man protesting produced the last Aro, so it is the turn of the next family. But he insisted that it must be his turn and things are not done that way.

“He came to the palace to protest. Incidentally, somebody died – I think in their family – and he brought it (the corpse) to the palace. I am on the side of the truth; I am not an oba that can be scared.

“What he did made me to install the right candidate right there in his presence. I told him to wait for his turn. If he has any problems with that, he should go to court.” 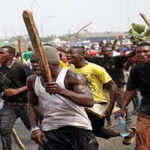