Menu
The inch-long scar on the neck of 53-year-old Mrs. Christiana Ashinwo, is one of the physical reminders of the horror of Sunday, April 24, 2016. 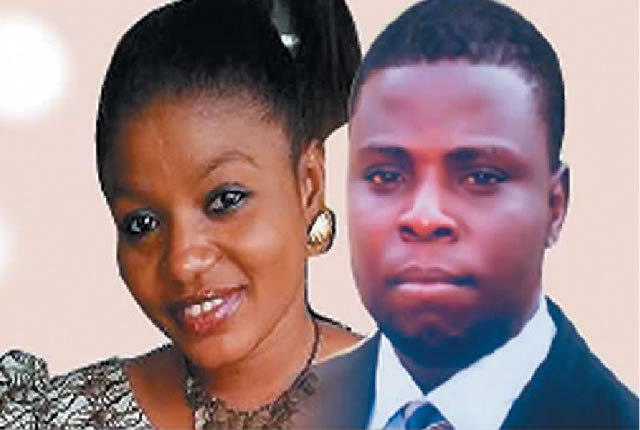 She sat on a chair quietly in the sitting room of a house in Agbado area of Lagos, which she built with the sweat and suffering of many years as a single mother and plank vendor. Her head was bowed but when Mrs Ashinwo looked up, her eyes were glazed with a faraway look that would easily giveaway the fact that she could have witnessed trauma, great trauma that she obviously had yet to recover from.

Who would blame her? Watching her daughter killed before her presence, is enough to give her chills every moment for the rest of her life. The horrific incident she witnessed and survived few months ago in Kwara State remains so fresh on her mind.


Our correspondent had reported on April 30 how Mrs. Ashinwo and her daughter, 30-year-old Oluwatosin Ashinwo, an employee of MTN in Ilorin, Kwara State were attacked by a knife-wielding obsessed suitor of the young lady, 45-year-old David Ogundele.

The older woman’s injuries were no less extensive, as she spent many days in the emergency unit of a hospital in Ilorin as doctors battled to save her life. She would later spend another two months in the intensive care unit of the hospital. 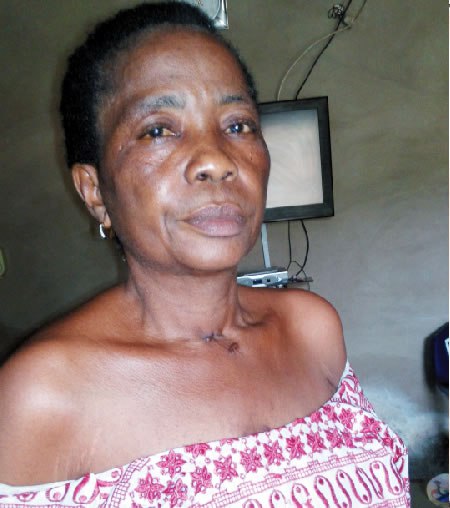 Our correspondent paid her a visit in Lagos, days after she was discharged and brought back home.

With a very raspy voice and intermittent cough that came out with each word, one would conclude that all was still not well with the woman, who was left for dead in the pool of her own blood in Ilorin that fateful day.

For her, the agony she feels with each morsel of food and gulp of liquid passing through her knife-damaged throat was nothing compared to the daily torment of thinking about how she lost her first child, breadwinner, and daughter.

“I knelt down to beg my daughter’s killer as he held the knife that later took my daughter’s life. I thought kneeling would pacify him,” she said.

The story Mrs. Ashinwo told was one of agony, climaxing at the moment she laid in a pool of her own blood and tried with every ounce of her waning strength to crawl to where her daughter laid lifeless.

“I was dead; I don’t know why God brought me back. But I am sure I was dead that day. I tried to crawl and touch my daughter but my strength failed. I could see she was not breathing. There was blood everywhere; mine and my daughter’s,” she said.

According to her, the day of the attack was the first time she would meet the killer, Ogundele.

“The first time we spoke, he called me and introduced himself as Engineer David. He told me he was my daughter’s friend and I should help him to appeal to my daughter to marry him.

“I was surprised but I told him that my daughter was a 30-year-old woman. She was free to make her own decision about who to marry.

“He called again some weeks later and said he and my daughter had settled the issue.

“The next time, he called, he was very angry. He said he had never been humiliated the way my daughter humiliated him. It was few days after my daughter’s birthday. He said he organised a birthday party for her and invited his friends and even bought a car as gift but she did not honour the invitation.

“I did not know what to say. My daughter already had a car and already has someone else she wanted to marry. I told him not to be annoyed and forget about the issue since my daughter had made up her mind.

“Prior to April 30, I started having some bad dreams about my daughter and became really concerned. I decided that it was time to go and check on her to know how she was doing.

“On my way to Ilorin, the man (Ogundele) called again and said as soon as I get to Ilorin, he would come and pick me at the park. I said nothing. But since I did not even know him I went straight to my daughter’s place without calling him.

“When I met my daughter, she took me to a woman, who seemed to be her confidante. We ate and the woman told me that my daughter had a fight with one man called Engineer David that day and the man threatened to kill her.

“I did not waste time; I stood up and told her I must report to the police. But my daughter told me to let the matter go. She said I was just making a big issue out of a small matter.

“She said that was why she did not like telling me some things some times. I let the matter go because I did not want to be like an overzealous mother.”

But that was one decision that would haunt Mrs. Ashinwo every second of every day.

The following day, Sunday April 30, without any hint about the danger that lurked in the shadow, she and her daughter had just got home from somewhere that day. As they entered Oluwatosin’s flat, Ogundele, who was said to be have been hiding around the flat, cornered them in the flat.

“He entered and locked the door behind him and put the key in his pocket. I had just finished bathing when my daughter called out to me that he was in the flat. I quickly dressed and prepared to meet the man that had been disturbing me so much with calls. When I saw him, I said ‘Good day, pleased to meet you’ and he replied that, ‘there is nothing good about today.’

“I told him that even if they offended each other, it should not be that bad that it would require the use of a knife. I told them they could still be friends. When I realised he had no intension of dropping the knife, I went down on my knees. I was begging him to drop the knife. Then, he came to where I knelt and carried me up.

“Just when I thought the issue would end, he rushed at Tosin and held her down on the bed. He started stabbing her furiously. As my daughter screamed, I rushed at him. I could not just stand and he stared stabbing me too over the body.”

By the time the attack was over, Mrs. Ashinwo had been stabbed at least 10 times in her torso, with the knife going through her throat in the

As all became quiet in the room where the dying women lay, Ogundele, dropped his weapon, the bloody knife and locked his victims in the room, Saturday PUNCH learnt.

Minutes went by as Mrs. Ashinwo tried to call out to her daughter who was bleeding from every parts of the body.

She said she was so weak she could not even call out to her daughter who had become lifeless at that point.

Lucky for her, she heard someone in a kitchen behind her daughter’s window. The woman said she used the last ounce of her strength to call the person, who later raised the alarm.

By the time the door was broken down, it was too late for Oluwatosin. She was pronounced dead on arrival at the hospital.

As Mrs. Ashinwo told this story, there was no doubt it was with tremendous agony as she relived the gory details.

Saturday PUNCH had earlier reported that Ogundele was arrested in Osun on Saturday, May 14, after the police tracked him down with undercover agents.

But Mrs. Ashinwo said the police have not even contacted her to give evidence. She said she could not understand why Ogundele has not been charged to court.

The spokesperson for the Kwara State Police Command, Mr. Ajayi Okasanmi, said he did not have information about the prosecution of the suspect when our correspondent called him.

He said he would call back to give update about the status of the case but had yet to do so as of the time of filing this report. -PUNCH 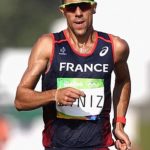 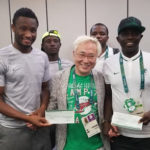