Menu
One of the judges arrested by the DSS over allegations of corruption has written a public letter to explain the humiliation and harassment the men of the secret service subjected him to.

A judge of the Federal High Court, Abuja division, Justice Nnamdi Dimgba has said the invasion of his residence by men of the Department of State Service (DSS) was to intimidate him.

Justice Dimgba, who gave details of his ordeals in the hands of the DSS, said the security personnel subjected him to harassment and intimidation because of the rulings he had delivered against the DSS.

The judge was one of those arrested in Abuja last weekend by the DSS. Justice Dimgba spoke in a letter to the chairman of the National Judicial Council (NJC), Justice Mahmud Mohammed (who is also the Chief Justice of Nigeria).

He stated that on September 16, 2016, the DSS invited and detained the Registrar attached to his court at its office in Abuja.


The judge added that the Registrar was not only detained but her were also phones seized while operatives of the DSS “threatened her to provide them with testimonies that can implicate me in the performance of my official duties.”

Justice Dimgba, who lives next to Justice Adeniyi Ademola (also of the Federal High Court), added that the same registrar was re-invited on September 26, 2016.

The judge, who expressed disappointment with the conduct of the DSS, has sought the permission of NJC to sue the security agency for allegedly violating his rights.

”When the DSS did not succeed in their above goal of implicating me through the court registrars on Friday, 7 October 2016 by 8pm, they invaded my residence.

“When I asked, they first presented me with a search warrant for a No 19 Ogbemudia Crescent, Apo Legislative Quarters, Zone E and which had a John Inyang Okoro as defendant.

“When I explained that my house address was not 19 Ogbemudia Crescent, Apo Legislative Quarters, Zone E and that my name was certainly not John Inyang Okoro on the search warrant, the DSS team leader explained that there was a mix-up.

“He then presented me with another search warrant for 30 Ogbemudia Crescent, Apo Legislative Quarters, Zone E but which had A.F.A Ademola as the defendant.

“When I also explained that I was not A.F.A Ademola but that my name was Justice Dimgba, the DSS team leader stated that whatever was the case, they said the DSS were under instructions from above to search Justice Nnamdi Dimgba’s house,” he said.

The judge said he tried to resist the search on the grounds that the activities of the DSS men was not backed by search warrant and later managed to “seek refuge in the garden” in an adjacent premises.

“I endured the whole ordeal in this open garden as the neighbour was away.

“Thereafter, the DSS operatives turned on my nephew who resides with me and my driver.

“They beat them to pulp with guns and forced their way into, ransacked the entire house in the course of execution of a non-existent search warrant.

“They went away with my bag containing a number of case files which I had planned to work on for the weekend in relation to judgments adjourned, my power cable of my laptop and also my own copy of the reply dated September 4, 2016 which I had sent to the NJC to the DSS’ petition against me,” Justice Dimgba said.

He added: “I pray, my Lord, for your intervention to: (1) stop these acts of harassment and intimidation against me by the DSS; and ensure the immediate return of these seized case files and my answer to their petition to me.

“Not returning the case files make it almost impossible for me to proceed with the completion of the judgements.

“I also wish to state that I intend to commence legal proceedings in court against the DSS for the above brazen violations of my rights, unless my Lord otherwise advises.”

Culled from The Nation 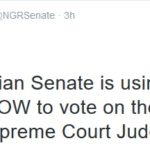 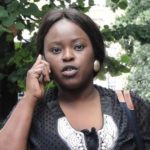