The Indian parents of a little baby are full of thanks to God as their one-year-old daughter survived being crushed by a train after her mother accidentally dropped her on a train track.

The child’s parents had just stepped down from the train when she accidentally slipped off her mum’s hand and landed on the train track.
A crowd watched in anxiety, as her parents couldn’t get her out of the track because a train passed almost immediately.
Miraculously, the train didn’t hurt the child as she landed in the gap between the floor and the track. She was picked up immediately after the pain passed, tearful but unhurt.

They all hugged each other in clusters to monitor the child’s body. Most starting from its head.

The incident happened at a station in Mathura, Uttar Pradesh.

They are shown in a video feeling relieved after the near-death experience. 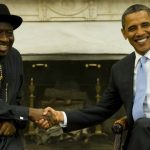