Chief Opeyemi Bademosi the CEO of Credit Switch Limited and the Lotin of Ondo Kingdom was on wednesday murdered by his newly employed Togolese cook.

Residents of Onikoyi Lane, Parkview Estate were in the early hours of Wednesday thrown into mourning as the news of the death of Chief Opeyemi Badamosi, Chairman of Ondo Development Committee (ODC), came to them as a rude shock.

According to one of the neighbours of the deceased septuagenarian and father of four; who pleaded not to be named,

“I heard a scream from the wife, so I ran outside to their flat and saw her screaming outside with people holding her as she said that her husband had been murdered. When we got inside, we saw the man in a pool of blood with the volume of music increased to the highest level.

“Already we had called the attention of the estate police before going in and they arrived just on time. According to the wife, she said she left her husband very early this morning to do some transactions in the bank. On her way back, she called her husband and couldn’t hear what he was saying as his words were barely cohesive, and was just muttering words before the call dropped.

“She attempted to call him back but he wasn’t picking up his phone. On getting home, the security man was still asleep and couldn’t even respond to her car horns till she got down from her car, to bang on the security man’s window; that was when the security man eventually woke up to open the gate for her. But unfortunately, on entering, she met her husband lying in a pool of his own blood and couldn’t find the cook who just resumed work on Sunday anywhere.

“That was when she screamed out for help and sent the security man to help her run to see if he can still apprehend the cook. Perhaps because of fear, the security man who was just employed on Sunday as well, also took to his heels upon the news that his new boss had been murdered”.

In an interview with Nigeria Police Force Homicide Investigation Team officer who pleaded not to be named, he said:

“This is very wicked. In fact, that guy must be a devil itself. He stabbed the man in multiple places. I was the first to enter the apartment. In fact, the music was so loud that even if you were to be killing 20 people here, no one would hear them scream. I was the one that put off the sound upon entering.

“After committing the act, the guy went to the toilet and pulled off the white uniform meant for cooks he was wearing because it was all stained with blood. He also left the knife he used inside the toilet there. If you see the knife, it’s a very strong, long and sharp knife that could only be authorised for military personnel. Afterward, he ransacked the whole apartment and carted away all valuables he could lay his hands on including an unaccountable sum of money, jewelries and the deceased phone.

“What baffles us more is that, no one seems to know anything about him because he was only employed few days ago and brought from Ondo State to resume just this last Sunday. And they only know him by his first name, which is Sunday. Again, we went through his things and found some old pictures of him putting on a camouflage belonging to Republic of Benin military. Also he was in a group picture with all of them wearing Benin Republic military uniform, which suggests that he could be an ex-service man in Benin Republic.”

A former security guard at the apartment, who pleaded not to be named said he was sacked from his job after working for just a month with no reasons given to him and was paid off by the deceased on the eve of the incident.

“I just returned from police questioning. I was the one guarding that house before. That oga is a very nice man. When I resumed work, I realised that there wasn’t a manifest where security man can keep record of any visitor that comes around. So I developed that,” he said, adding that he realised that immediately he started doing that, he began to have problem in the house, consequently leading to his sack.

He said it was on Sunday, “I realised that they have employed new cook and security man when I went there to carry my fan. And yesterday (Tuesday) evening, Oga (the deceased) called me to come and collect my salary, which I went and I saw him. He was hale and hearty

The Divisional Police Officer (DPO) of Ikoyi Division, Ikoyi-Lagos, SP Mustapha Tijani, said an official statement would be issued by the police as soon as they were done with investigation, “but right now, efforts have been intensified towards tracking down the cook who is at large.

Before leaving the venue, the newly employed security man, came back to the crime scene, accompanied by his guarantor for the job. Both of them were later whisked away by some police officers. 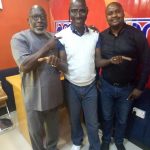