Security authorities in Thailand have decided to have overweight police officers undergo a weight loss exercise to reduce their pot-bellies.

It was gathered that some overweight officers are currently in the weight loss camp as part of a nation-wide campaign dubbed “Belly Destruction”.

Prior to their camping, reports say there was two-week piloting of the programme which saw about 200 Thai police officers take part, and based on its success, authorities thought it worthy to make better use of it for good health.

It is reported that policemen weighing as much as 200 kilograms were able to lose up to 60 kilos of extra weight in the pilot programme, while slightly overweight ones (around 80 kg) shed up to 20 kg.

Some other police officers are reportedly in the Central Police Training Center in the city of Pak Chong, to take part in an intense physical activity designed to adjust the size of their bellies.

They had their heads shaved, and have to be topless in order to expose their protruding bellies. They are also given ID cards bearing their records before and after the programme to help figure out progress made.

Senior Sgt Maj. Sornpetch Chantarak, a dietary enforcer in the new program is quoted as saying:

“There are so many problems if you’re a fat cop. You work slow and move slow as you go tumbling about. That’s unacceptable if you’re an officer tasked with arresting criminals, since you have to be deft and go quickly.” 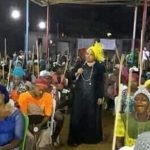