There was a serious clash between a young man and his estranged girlfriend yesterday over N20,000 at the Michael Okpara University Of Agriculture, Umudike in Ikwuano local government area of Abia State.

According to reports, the guy and his girlfriend named Jane have been having problems between them which purportedly made them to break up.

It was reported that this did not go down well with the young man who has spent “so much” on the girl including helping her with her school fees as he stormed her lecture room to request for his money back.

During the incident which was captured on camera, the student can be seen harassing and even slapping the estranged girlfriend in public in front of a baying crowd of students and can be heard saying ‘Jane where is my money’.

Some students tried to restrain the young man from further harassing the young lady but he resisted them.

The young man has heavily been criticized for his action which many felt was totally unnecessary and uncalled for. 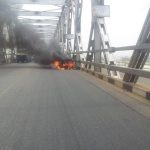