Popular Nollywood comic actor, John Okafor, popularly known as Mr. Ibu, has debunked the rumors making the rounds that he is currently being taken care of by an undisclosed traditional doctor after suffering stroke.

A close source had earlier disclosed that Mr. Ibu has been down for a while with a mysterious stroke shortly after he returned from his recent trip to Owerri. He has asked Nigerians to pray for him at this period.

However, during a chat with Vanguard on Thursday, the actor confirmed that he is fine, stressing that he is not suffering from any form of sickness or ailment. He said:

“Na so I hear oooo. I am hale and hearty. I am speaking from my house, in Lekki.

“Na their papa get stroke.”

He also debunked the stroke rumors going round by sharing a video on social media.

”People are saying that I have stroke, that I am down with stroke. Why? How can you announce somebody’s and you have many and you haven’t announced yours? I don’t have any stroke please.” 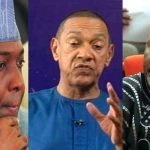