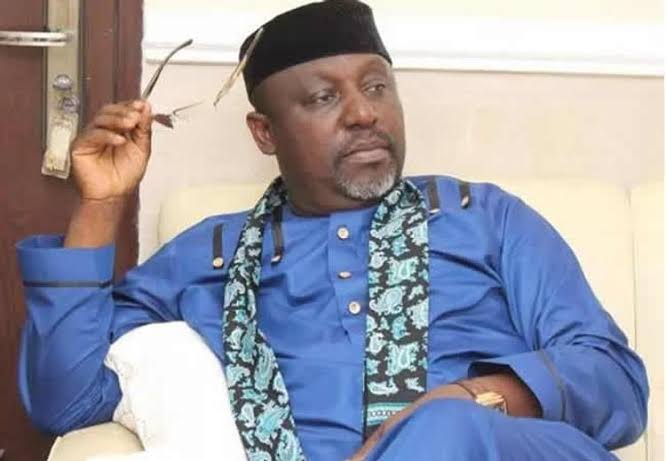 Some videos have emerged on social media showing the government of outgoing Governor Rochas Okorocha and his family members allegedly looting the properties of Imo state.

In one of the videos allegedly shot at Heroes Square in Owerri, the Imo State capital, trucks were seen loading irons rods supposedly meant for construction work in the state and dismantled electric poles.

A citizen of the state who was narrating what was happening in the video, accused Okorocha of being behind the looting, claiming that many of the trucks, which were loading at night, had already gone before people arrived at the scene.

According to the narrator, a relative of the governor, Jude Okorocha, was spotted with the trucks but ran away the moment some citizens of the state arrived the scene to stop the looting. He said:

“Imo people this is live, now reporting from Hero’s Square where the outgoing government of Rochas Okorocha is looting virtually everything that remains in Imo State. You can see the rods now, these are rods meant for building that have been packed here for years. Now they have come to pick them…

“Since three hours now we have been struggling with them, Jude Okorocha was here, as soon as he saw us he ran away. They are carrying everything that belongs to Imo State, by this time of the night.”

In another video, a woman and some citizens of the state standing outside the locked gate of Heroes Square, were seen shouting angrily at some people inside the premises.

“These things belong to Imo people. You cannot steal everything because you lost an election, Imo people rejected you and you want to carry everything away,” they were heard saying.

Meanwhile, Okorocha in a statement on Friday claimed PDP members in the state have “embarked on systematic and violent looting of properties owned by the state and brought or installed by his government.