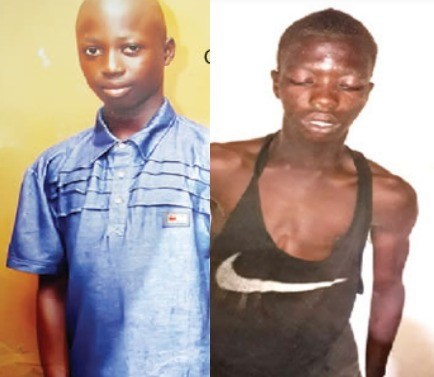 Kehinde Adeoye, a 19-year-old welder apprentice in the Agbado area of Ogun State, has been arrested by men of the state’s Police Command for the murder of his 17-year-old friend, Lukman Olawunmi.

Reports say that Kehinde and Lukman have been friends for many years and were both learning how to make cans at different shops.

According to local reports, an unidentified man had come to Lukman’s shop to request that he repaired his umbrella for him. Lukman decided to take the umbrella to his friend Kehinde who knew how to fix Umbrellas. Kehinde billed him N200 which Lukman gave to him and he was asked to come the following day to pick it up.

The next day, Lukman went to pick up the Umbrella as promised but was surprised that Kehinde had not fixed it. An argument ensued between them which soon degenerated into a fight.

Kehinde was alleged to have slapped Lukman with a ‘mysterious ring’, causing Lukman to slump. He was rushed to the hospital immediately where he was certified dead on arrival.

The matter was immediately reported at the Agbado Police Station and Kehinde was arrested.

When interrogated, Kehinde denied attacking his friend with any mysterious ring. He said:

“We were close friends and we usually introduced customers to each other. The umbrella was the devil that caused all this. When I could not repair the umbrella, he came to our shop to collect it and the N200 he gave me. I told him to be patient and I promised to give him the money and the umbrella later that evening. He slapped me and I slapped him back. He fell and I poured water on him. I was the one who rushed him to hospital. I did not use anything to hit him. We were not fighting. We were playing.”

The police says he will be charged to court immediately investigations into the matter has been concluded.

Amaechi Explains Why Igbo Will Not Produce President In 2023, Advises Atiku