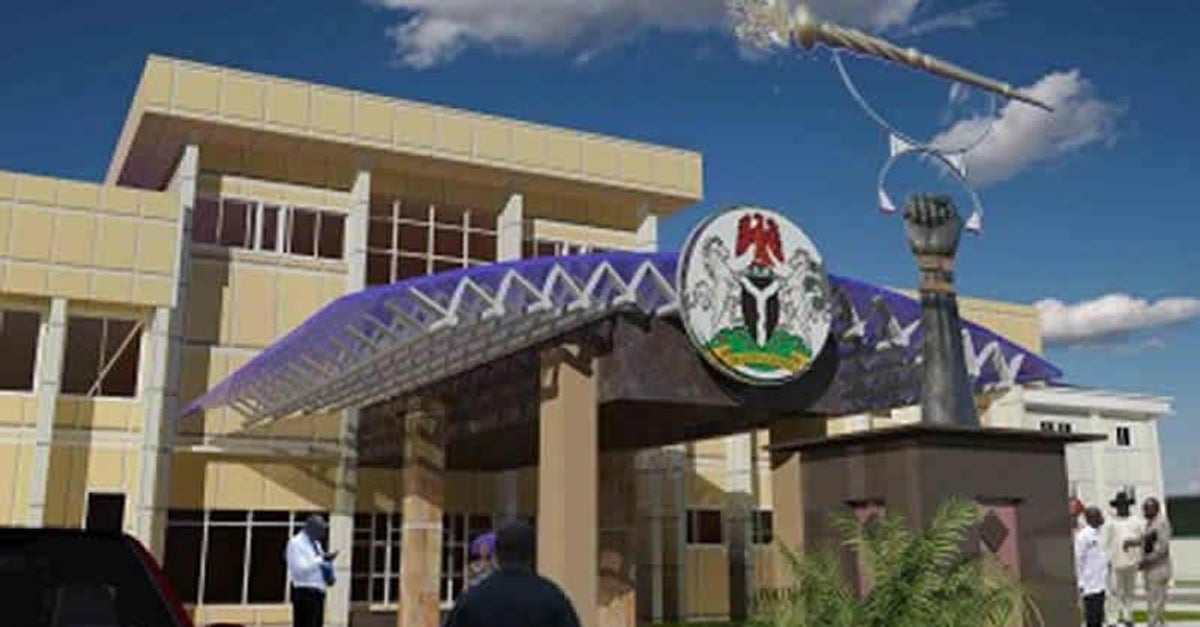 It has been full of revelations in the ongoing matter filed by Hon. Ezediaro, Henry Uzoma of Action Alliance (AA) challenging the declaration and returning of Barr. Frank Ugboma of the Peoples Democratic Party (PDP) as winner of Oguta State Constituency election held on the 9th and 23rd day of March, 2019 at the Imo State Governorship/State House of Assembly Election Petition Tribunal sitting in Owerri, Imo State.

In the matter in court, Hon. Ezediaro who seeks the leave of the court to be declared winner of the election having polled the highest number of lawful votes cast on the 9th of March, 2019 election.

Hon. Ezediaro who buttressed his claims through his lead counsel said that the unilateral cancellation of the already collated booth results by the LGA Returning Officer posted for purposes of the election was unlawful and alien to the Electoral Act and 2019 INEC Election Guidelines.

Hon. Ezediaro through his expert witness was able to compute the collated results of 9th March, 2019 with duplicate copies he got from his accredited polling unit agents as the original copies of the result sheets where torn by the candidate of the PDP and his agents at the premises of the LGA Collation Center.

The Petitioners, Hon. Ezediaro Henry Uzoma and the Action Alliance where able to call over 15 witness to prove their case and all the witnesses agreed with the petitioners that election was held peacefully, results collated and announced at various polling units and duplicate copies given to agents of political parties present inline with the electoral guidelines.

All the Presiding Officers that appeared as witnesses to the petitioners told the court that at the course of their training by the Independent National Electoral Commission (INEC) prior to the election, that they were asked to declare results at the polling units and hand over duplicate copies to party agents that are present at the polling units.

During the cross examination, they informed the court that upon arrival at Oguta Girls High School, venue designated by INEC for collation of results, that they were attacked by hoodlums who tore original copies of the result sheets from various polling units.

They further told the court that they wrote reports to the Oguta LGA Electoral Officer in respect of the incident and advised that inline with electoral guidelines, that duplicate copies of the torn result sheets should be used for collation of results but that the Returning Officer and the Electoral Officer (EO) paid deaf ears to their suggestions.

In his defence, the court was thrown into laughter and amazement on how the defendants, Barr. Frank Ugboma and the Representative of INEC helped Hon. Ezediaro to further buttress his claims.

Barr. Frank Ugboma without mincing words told the court that he personally tore the result sheets on grounds that they were fake and forged by the candidate of the Action Alliance.

During cross-examination, he was shown photographs of him tearing sheets of papers, he unequivocally agreed that the picture was him tearing the purported fake result sheets written and prepared by the petitioner.

When asked if he was a staff of INEC, or a Security Agent that can know the original copies of result sheets, he said that he was a mere candidate of his political party for the said election.

The. Tribunal where perplexed when the result sheets front loaded by the defendants were discovered to have been signed by one person, Hon. Engr. Alphonsus Gerald (AG) Irona.

It was discovered that His Excellency, Hon. AG Irona, the deputy governor of Imo State who hails from Oguta LGA signed 10 polling units results of 7 different Wards of Oguta LGA on the purportedly rescheduled 23rd of March, 2019 Supplimentary/Re-run election.

Hon. AG Irona with same signature signed all the result sheets from 10 polling units of 7 Wards as the Agent of PDP in those polling units.

When it came to the turn of INEC to start its defense, a twist alien to relevant laws of the land were discovered.

INEC told the tribunal that they couldn’t collate results of the cancelled units due to non voting, violence and tearing of sensitive electoral materials by hoodlums.

When asked if the commission reported any incident of violence in writing to the Nigeria Police or any other Law Enforcement Agency within the locality, the INEC representative said that he only communicated with the Divisional Police Officer for Oguta Police Command through his mobile telephone set.

Furthermore, during cross examination, the INEC representative failed to provide Incident Forms from various Polling Units written by Presiding Officers to adduce his claim on violence at the polling units. He was asked if there are reports from Security Agents to back his claims on violence across the polling units, he said no security agent wrote report in this regard.

When asked if he has powers to unilaterally cancel polling unit results without recourse to polling unit presiding officers, he said he has no such powers.

To the surprise of the petitioners and Tribunal members, INEC who claimed to have declared the election of 9th March, 2019 inconclusive where unable to provide the voters register of affected polling units, number of registered voters in the affected polling units, the difference between the leading candidate and others to determine the margin of lead which they claimed was too narrow, thus, declaration of the election, inconclusive.

As both the petitioners and defense counsels have closed their cases and written addresses/replies submitted to the Tribunal, the issues which Hon. Justice Harriman led Panel are faced with, which, it’s resolution will add value to our judicial process include but not limited to;

1. If the Petitioners proved their case beyond reasonable doubt.

3. Whether the 1st Respondent has powers to tear election result sheets on grounds that they were fake and forged result sheets.

4. Whether its lawful for one PDP agent to sign polling unit results of 10 different polling units of 7 different Wards of Oguta LGA.

5. Whether a non certified photocopies of result sheets are admissible in law even when claimed to must have emanated from a court of law. (Note the difference between a duplicate copy and a photocopy).

7. Whether the 3rd – 4th Respondents are empowered by any known law to cancel results of polling units without written reports of Polling Units Presiding Officers.

8. Whether the supplementary/re-run election as ordered and conducted by 3rd – 4th Respondents on the 23rd March, 2019 fulfilled the requirements of the law.

The task before Hon. Justice Roli Daibo Harriman led Panel is enormous as all eyes are on them for swift determination of the issues as canvassed by the petitioners and defended by the respondents. We look forward to a landmark judgement in the state by our revered jurists.

The task before Hon. Justice Roli Daibo Harriman led Panel is enormous as all eyes
are on them for swift determination of the issues as canvassed by the petitioners
and defended by the respondents. We look forward to a landmark judgement in the
state by our revered jurists. 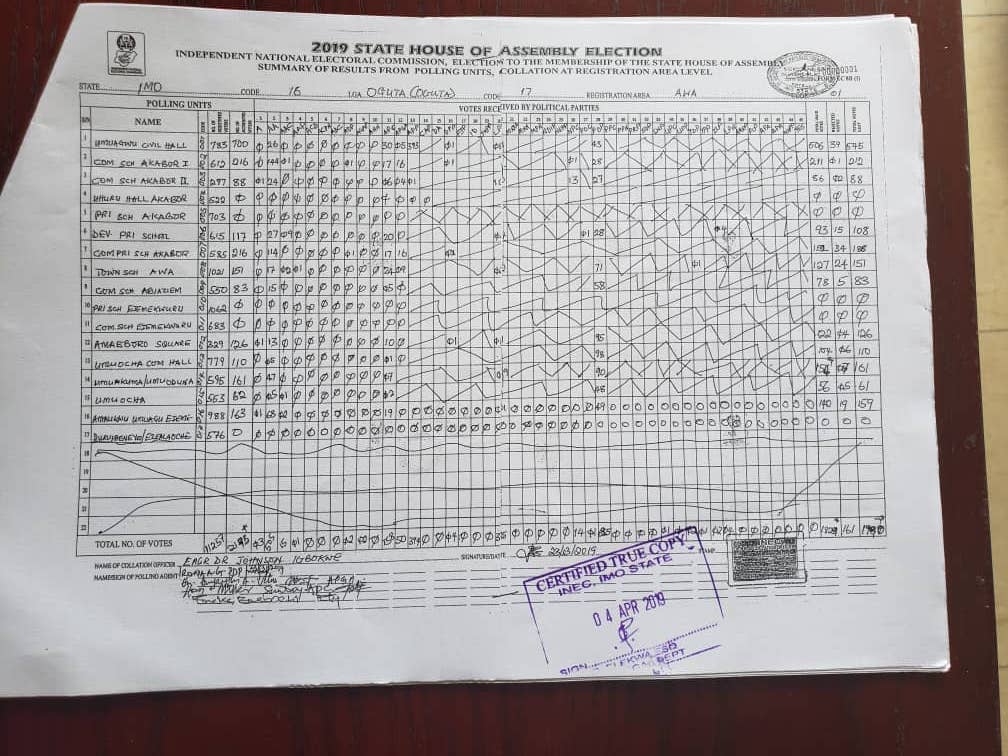 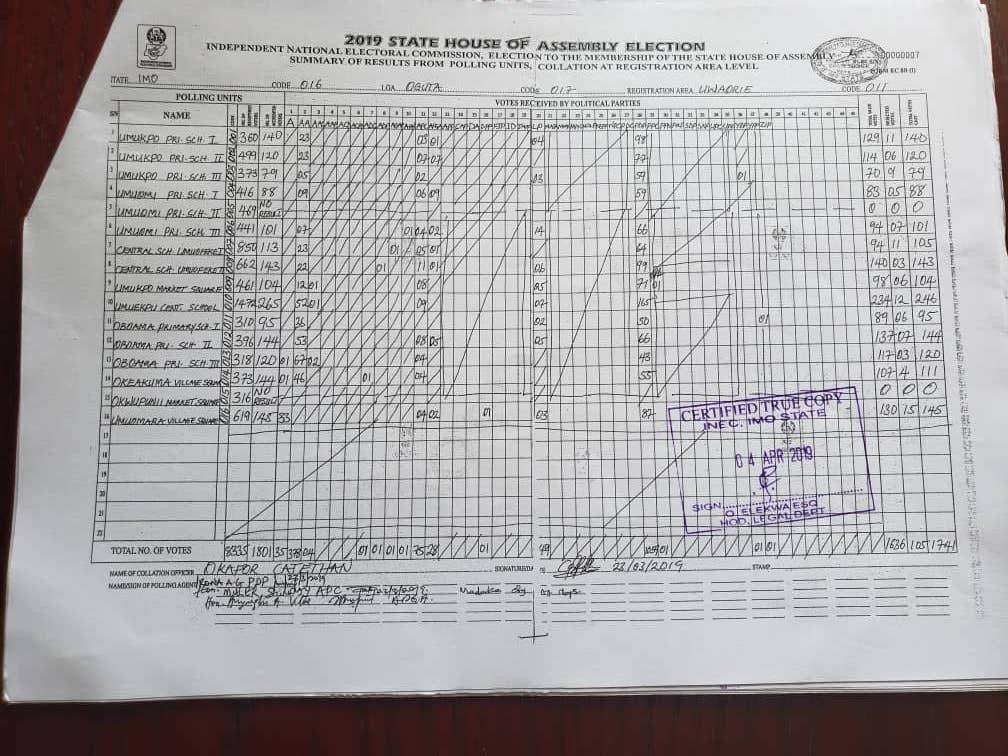 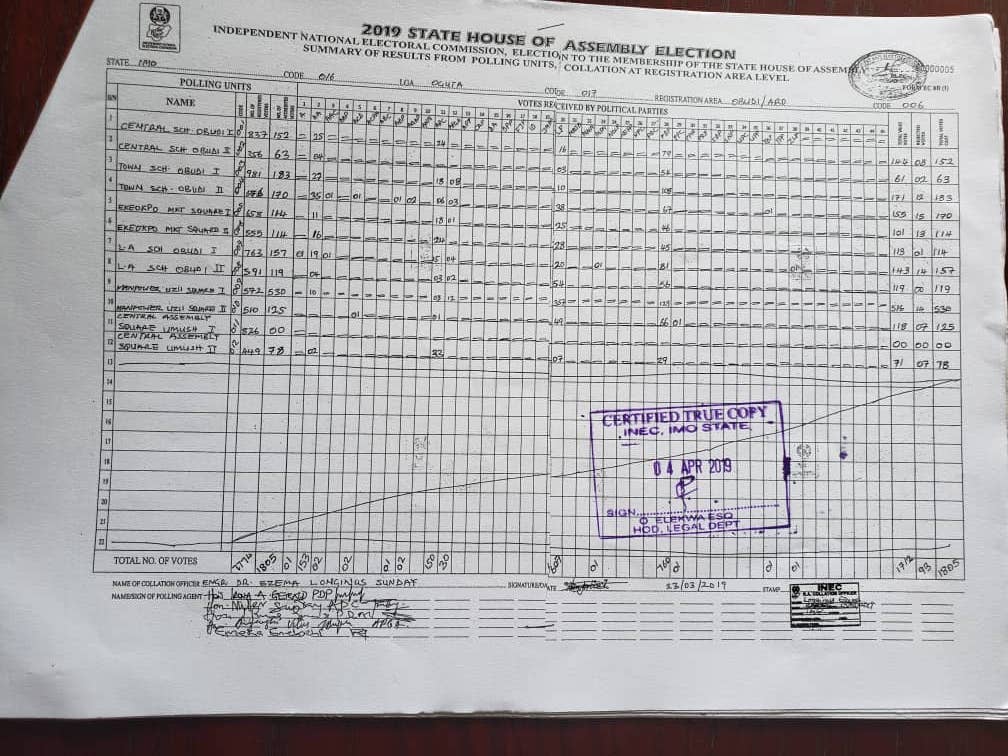 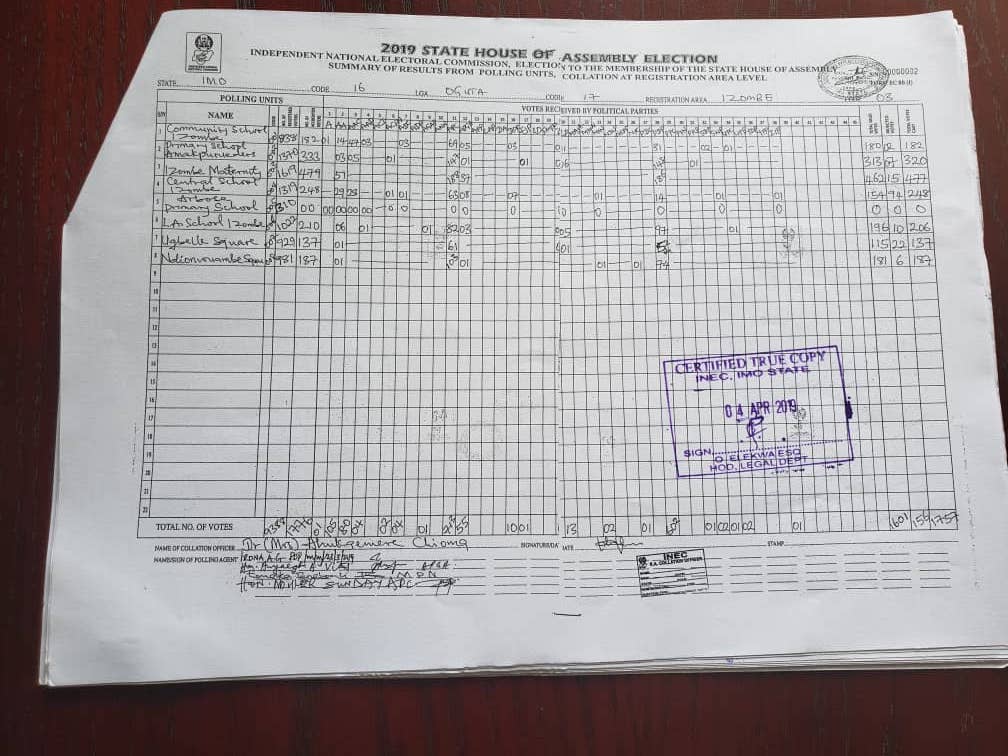 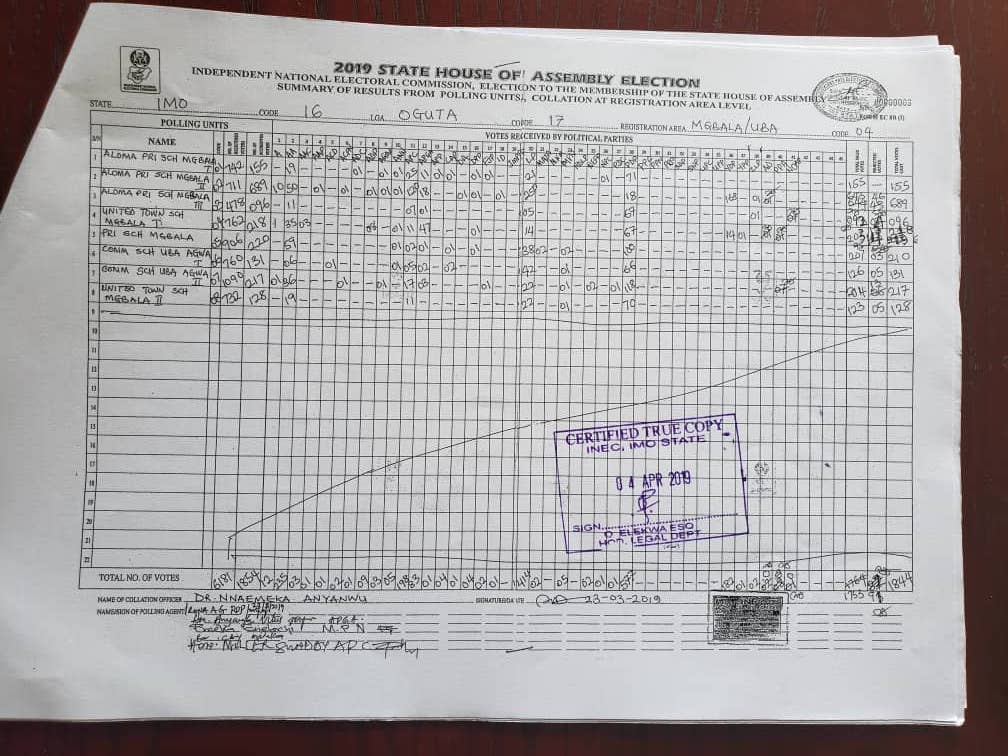 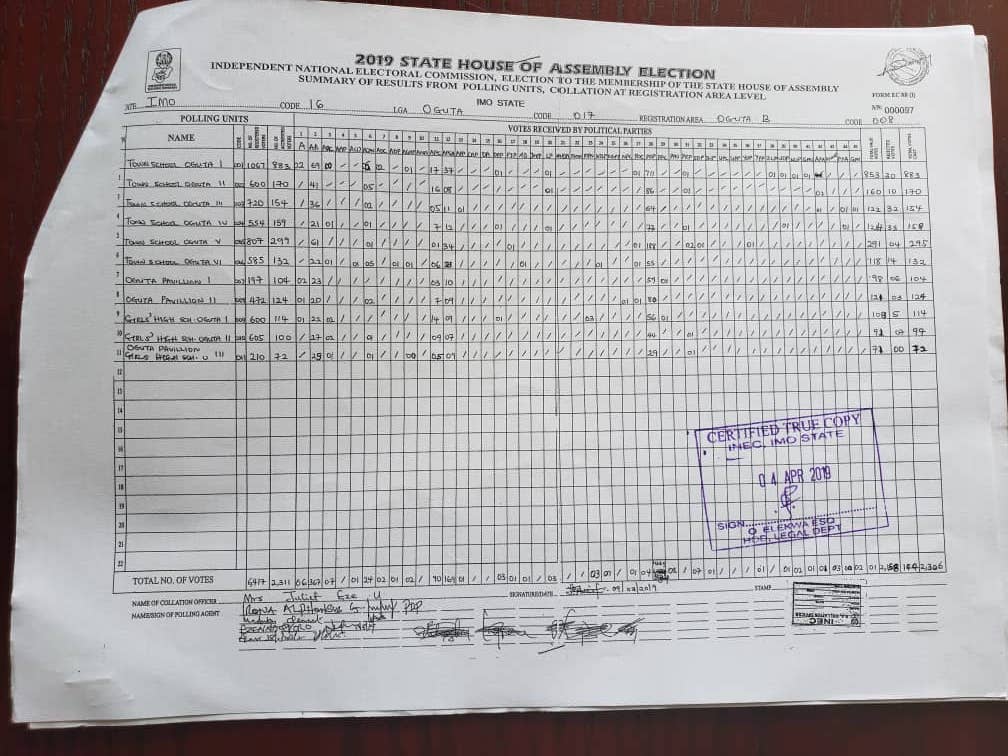 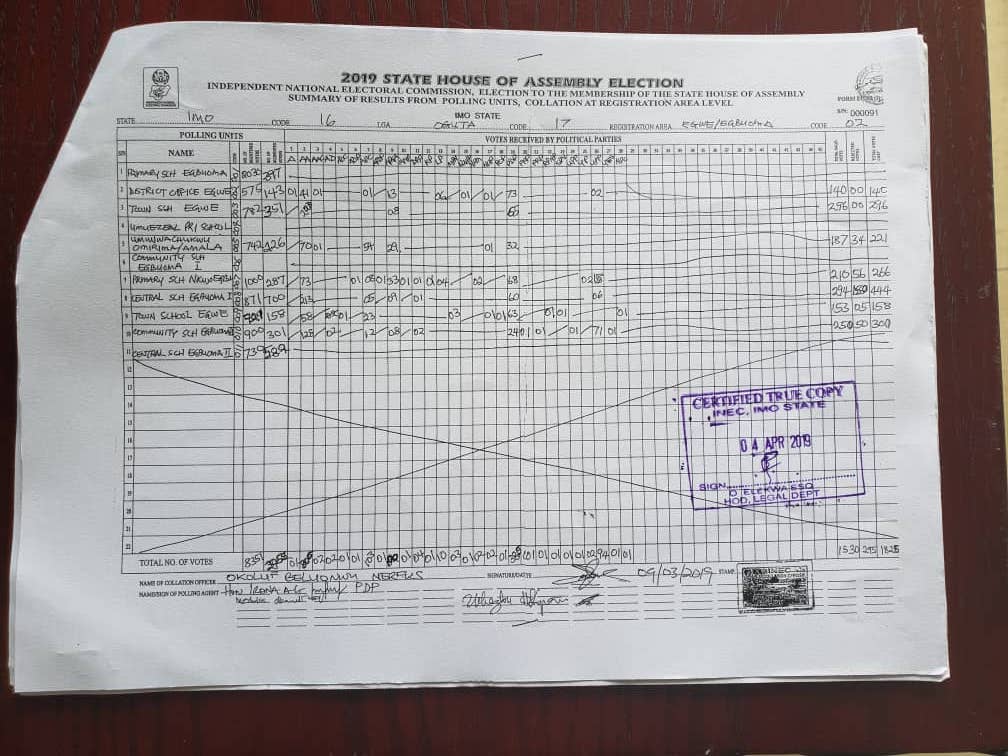 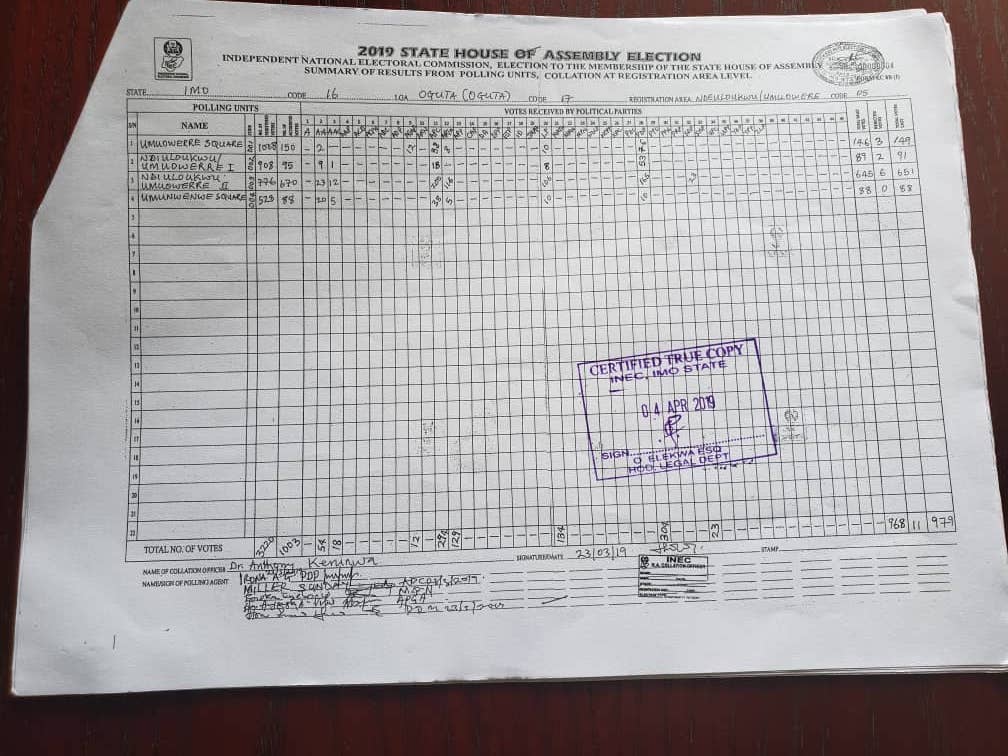 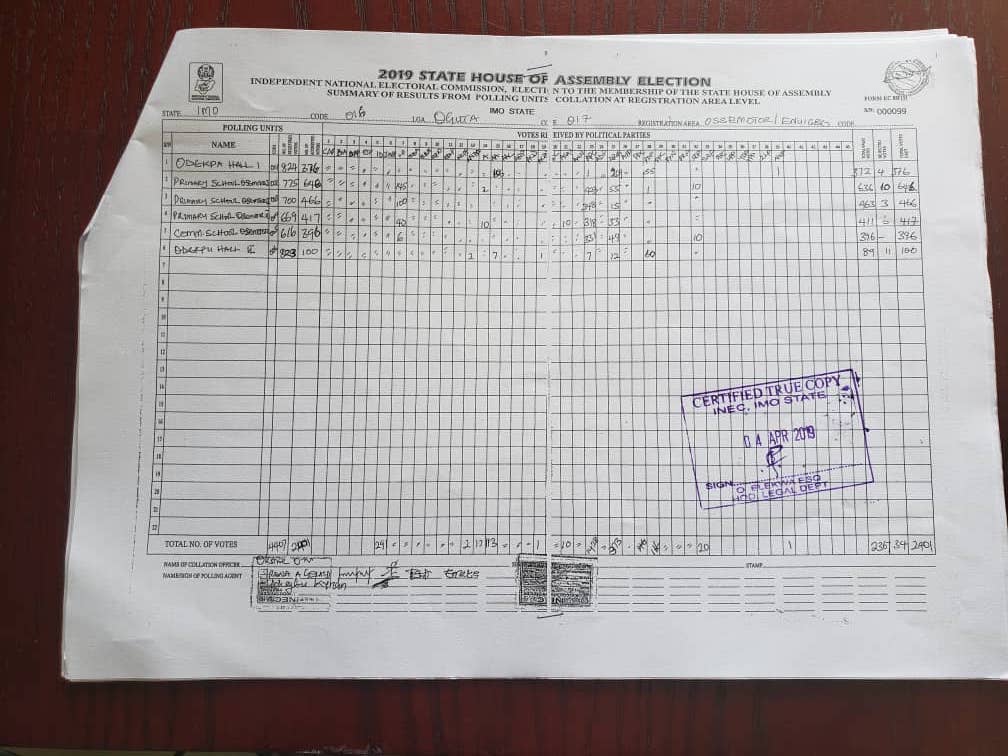 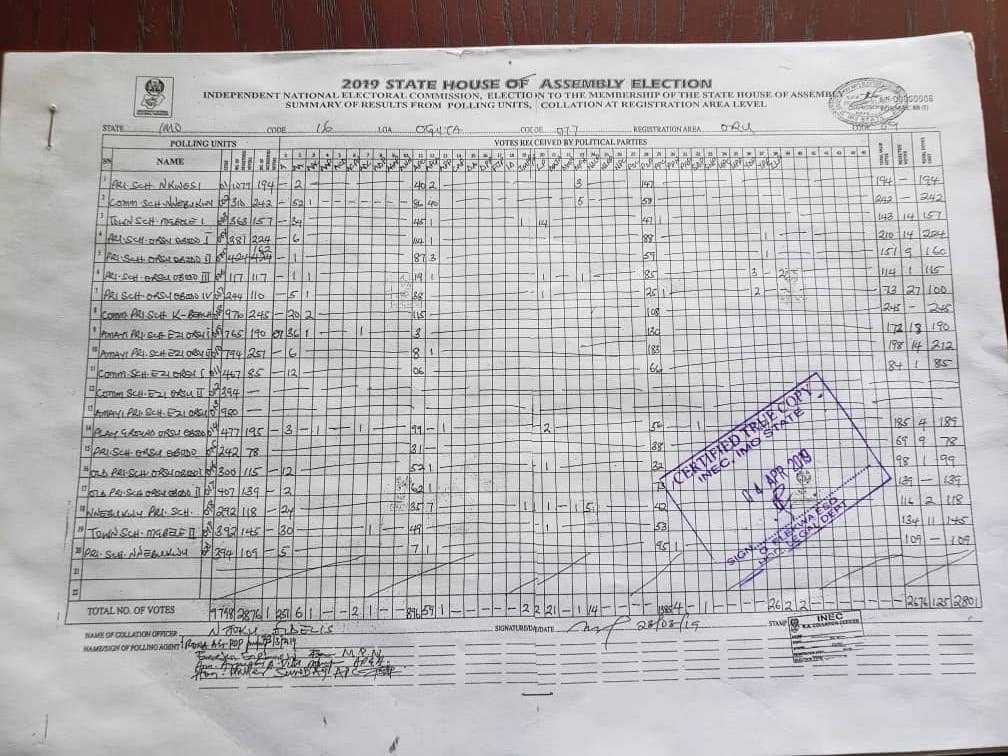 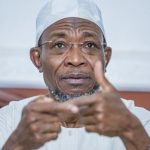 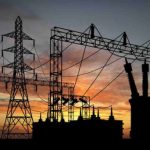