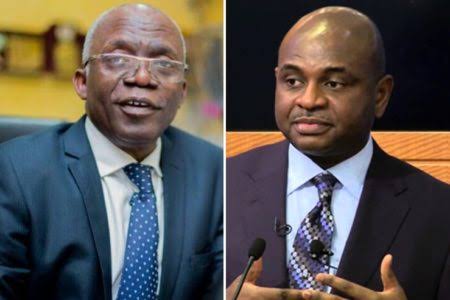 Former presidential candidate of Young Progressives Party (YPP), Kingsley Moghalu has reacted to allegation by human rights lawyer, Femi Falana (SAN), that he resigned from his party because he was given appointment by the All Progressives Congress (APC).

While speaking at the 2019 Felabration symposium held at the NECA HOUSE on Tuesday, October 15, 2019, Falana accused Moghalu of resigning from his party because he was given an appointment by the ruling party, APC.

“Is Dr. Moghalu still around? I think it is unfair to single out Dr. Moghalu for recognition,” Falana said.

“We should not celebrate opportunism. Here is a politician who contested on the platform of a party, who has moved conveniently to the APC.

“They’ve just given him an appointment and he has just discarded his own political party. I don’t think that is fair for all.”

However, in a swift reaction through his official Twitter page, Moghalu described the allegations as a ‘surprise and an embarrassment.’

He, therefore, demanded an apology and a public retraction from Falana.

The statement on his social media page reads:

“Yesterday, October 14, 2019 I attended Felabration 2019: The Fela Debate, an annual event to celebrate the life and work of the late musical icon Fela Anikulapo Kuti that held in Lagos.

“At a point in the event, the compere announced my presence to the audience, noting that I was a presidential candidate in the 2019 elections, and highlighted my unique connection to the event: my candidacy had been formally endorsed by Nobel Laureate Professor Wole Soyinka, who was also present at the 2019 Felabration; and my Yoruba name Ayodele has been given to me at my birth in Lagos by the late Mrs. Fumilayo Ransome Kuti, Fela’s mother. I left the event at the beginning of the Question and Answer session.

“To my great surprise and embarrassment later in the day, I saw and viewed a video news report entitled “Femi Falana (SAN) publicly attacks @MoghaluKingsley for joining APC.’

“These statements are false. I am not a member of the APC. I have not been given any appointment by the APC government. This effort to malign my character and reputation, by an individual I have always respected, was a complete shock to me.

“It is surprising that a man of Mr. Falana’s standing, a Senior Advocate of Nigeria no less, could make such weighty statements without verification.

“The media that reported this attack on me by Mr. Falana without checking the veracity of his statements acted in dereliction of their professional ethics and have actively spread fake news.

“I demand and expect an apology and a public retraction of this falsehood from Mr. Falana.”
Moghalu explained that since the elections he has moved into advocacy for electoral/political reforms and voter education in Nigeria.

“I contested in the 2019 presidential election as the flag bearer of the the Young Progressives Party (YPP). Since the elections I have convened To Build a Nation (TBAN), a non-partisan citizens’ movement focused on advocacy for electoral/political reforms and voter education in Nigeria. In order to strengthen the integrity of the movement’s non-partisan stance, I recently announced my resignation from the YPP. I am NOT a member of any political party.”

Meanwhile, KanyiDaily had reported that Moghalu announced his resignation from partisan politics, saying he need to push for electoral reforms ahead of 2023 general elections.

Hence, he was now going to dedicate his time to a citizens’ movement called Build A Nation (TBAN).

Man Robs Bank A Day Before His Wedding To Pay For Ring And Venue, But Fiancée Turns Him In