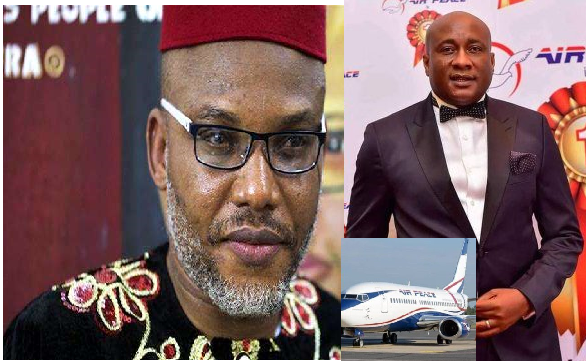 The leader of the Indigenous People Of Biafra (IPOB), Mazi Nnamdi Kanu has accused the embattled Chairman of Air Peace, Allen Onyema, of lying against him to please his Fulani masters.

Speaking during a live broadcast on Sunday, November 24, 2019, Nnamdi Kanu said IPOB shall defend Onyema despite lying against him to please his Fulani masters during an interview with BBC.

Nnamdi Kanu said his statement to Allen Onyema when he lied against him, must be the reason why the Fulanis went after him because they know that IPOB will not fight for him for undermining their struggle.

Despite the lie, Nnamdi Kanu revealed that IPOB will defend Mr. Onyema, but he shall be the last person whom the group shall grant amnesty.

”People have asked me to clarify the visit of Allen Onyema to my house. I think what I said in my last broadcast may have led to his recent investigation for fraud.

”Allen Onyema came to my house and we talked about things happening in Nigeria, including the hate speech.

”He said he wanted to see how there could be peace with our people in the North. He said we should take pictures with some people he came with and I agreed.

”All of a sudden one day he granted BBC an interview and lied against me.

”Then I reminded him that I know more about him than he can even imagine. After my statement the Fulanis went after him, they know that IPOB will not fight for him for undermining our struggle to restore Biafra’s independence. I will not ask him further questions, I believe he has learnt his lessons

”Onyema wanted to please his Fulani masters but now they have turned against him,” he added.

“We shall defend Allen Onyema and he will be the last Amnesty we shall Grant to anybody who lies against IPOB or myself.”

“I will meet with people that matters most in this case in the USA. And if FBI fails to Investigate the names we are going to submit to them, then we shall start a case of victimization with them.”

Nnamdi Kanu’s allegation is coming after Onyema was charged with bank fraud and money laundering.

Another Billionaire Richer Than Donald Trump, Joins Race For America’s Presidency In 2020