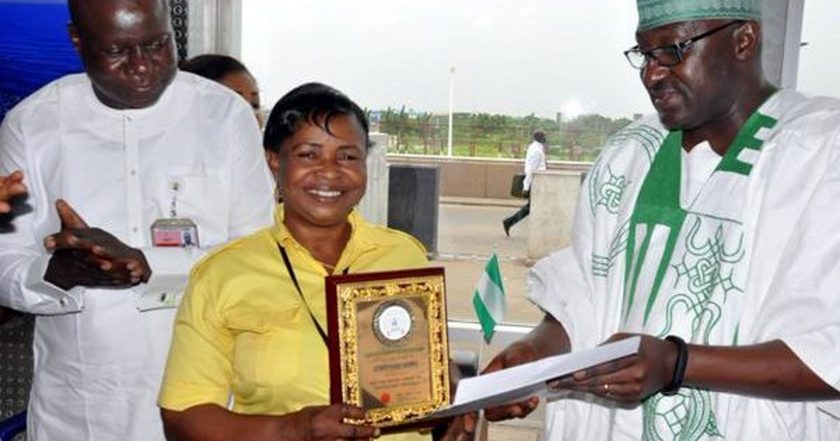 The Nigerian Government has rewarded a cleaner, Mrs. Josephine Ugwu, with an apartment and an award for returning the sum of $12,200 to a passenger four years ago, after she found it in one of the toilets at the Murtala Muhammed International Airport, Lagos.

On Tuesday, the government said it gave Mrs. Josephine Ugwu the apartment and award in recognition of her honesty and integrity in the discharge of her duties.

Mr. Ugwu also had a handshake with President Muhammadu Buhari when she received the award.

“Ugwu was subsequently given automatic employment by the authority in recognition of her honesty and exemplary conducts.

“She was given a brand new apartment in Lagos for her act of honesty and integrity.”

News Agency of Nigeria (NAN) recalls that in 2015, Mr. Ugwu, a staff of a cleaning company at the Lagos Airport, in 2015 found $12,200, which a passenger forgot inside a toilet in the facility and returned it to security officials at the airport.

About two years ago, the Lagos State House of Assembly recognized her with an award and gifts, while several other organizations also applauded her honesty.

The Federal Airports Authority of Nigeria (FAAN) offered her a job in one of its departments, Aviation Security.

BAYELSA: I Tried To Meet Jonathan 16 Times, But He Choose To Support APC – Gov Dickson