Lagos State government has arraigned 202 people for violating the order on social distancing amid the lockdown. 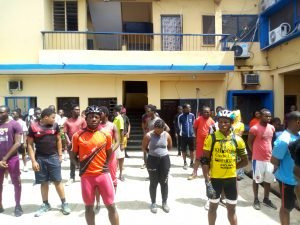 The 202 people include joggers, cyclers, and loiterers.

They were prosecuted today before two mobile courts at the Force Criminal Investigation Department (CID), Panti, Yaba in Lagos state for violating the no movement order in the state.

A task force team set up by the Lagos state government this morning arrested the defaulters at 15 areas in the state including Yaba, Agege, Ogudu/Ojota, and Iju while they were either jogging, cycling or loitering.

They were immediately arraigned before Magistrates Makanju Oshodi and Nurudeen Layeni on a one-count charge of violating the Social Distancing Directives contrary to Regulation 1(1) of the COVID-19 Regulations which is punishable under Section 5 of the Public Health Law of Lagos State, 2015.

The courts presided by Magistrates Makanju Oshodi and Nurudeen Layeni, found them guilty and ordered them to pay fines ranging from N5,000 to N10,000 to the Lagos state government and also ordered them to immediately begin a two-hour community service.

Meanwhile, Saudi Arabia’s king and crown prince has been forced into isolation after 150 members of the royal family reportedly tested positive for coronavirus.