A Nigerian screenwriter, Cassandra Owolabi also known as Khassie, has taken to social media to recount her bitter ordeal in the hands of her former boss and actress, Funke Akindele-Bello. 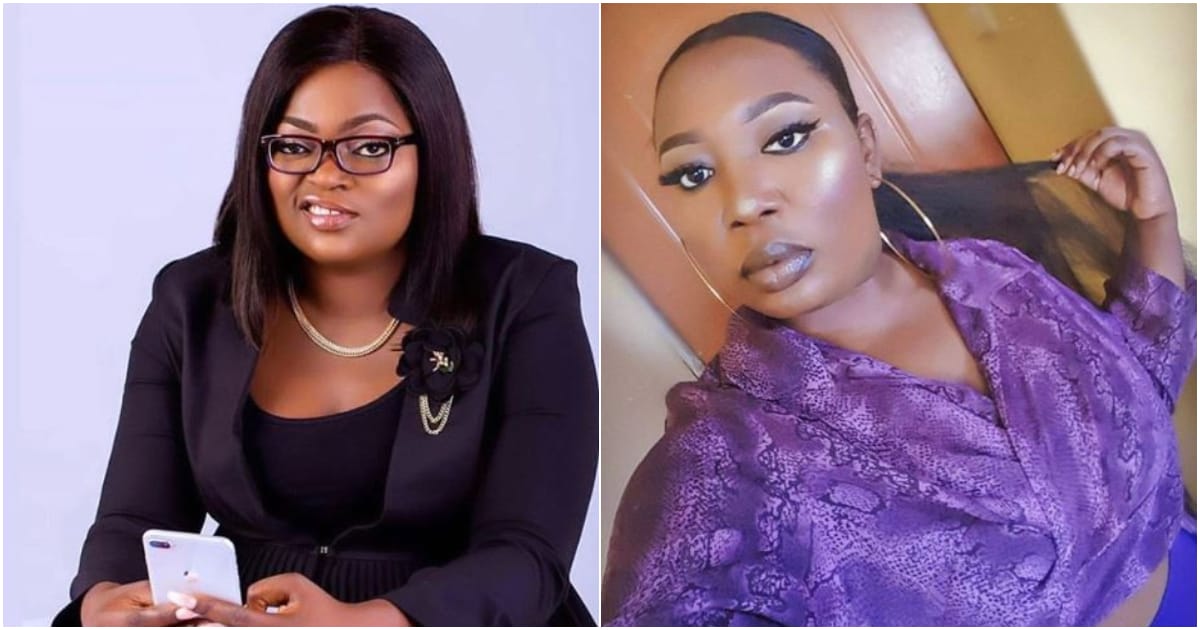 In a lengthy Instagram post, Khassie accused the actress of maltreating and abusing her staffs physically, emotionally and financially.

The script writer claimed she and other staffs would work for long hours without rest, alleging that Funke made them work under ‘duress and fear’.

The young lady also said that she once witnessed the actress slap a member of staff the way a mother would hit her child, noting that Funke continued to do malicious things because she had so much confidence in her fan base and how her fans would never believe she was capable of evil things.

Sharing a video on her Instagram page, the former staff he wrote: FINALLY FOUND THE STRENGTH TO SPEAK UP AGAIN

“A little update: About a month ago, I posted a lengthy video of my experience working with Funke Akindele. But the video was quickly brought down as a bid to shut me up. Naturally as a content creator, my instinct was to make another one right away but I couldn’t bring myself to it due to the fact that I touched on a really sensitive topic (depression) and some experiences I passed through while working for her which was like opening old wounds and I needed time to heal from that.

“I am indeed happy and relieved that I finally got to make another video in which I touched on a few things because truthfully, even if I was given a day I would still not be able to cover all the ills not just me but her staff face daily.

“The experience has indeed taught me that not all that glitters is gold, literally! Looking back I just wondered how I endured so much when we were deprived of so many things. For instance, we couldn’t watch TV (literally, the TV in our lodge was taken away weeks after we resumed) and she mustn’t walk in on you watching anything on your laptop (can’t tell you how many times she randomly sent people to come check if we were sleeping or doing anything asides writing). I mean, how do you expect your writers to be 100% productive when you don’t allow them some leisure time? It didn’t take me long to develop bloodshot eyes because there were daysssssssssss when we’d write all through the night, no sleep. We worked under DURESS AND FEAR. It is always about the script, the script is more important than you and your health.

“P.S – For the few who asked why my character in the YouTube series ‘HOUSEHELPS’ was replaced, well… Because I chose to leave she asked.”

READ:  Coronavirus: 230 Nigerians Left Stranded In Dubai After Paying N242K Each For Evacuation

A friend of Khassie also took to Twitter to confirm the story, writing:

But we won't back down. It is wrong to think you own people because they work for you. Click this link to watch her new video as she addresses some of these issues. Also check the comments for other people that are speaking up.https://t.co/mT3IOCORra

Soon, a handful of Nigerians rose up corroborating the accounts of abuse at the hands of Akindele. Some narrated instances in which she had refused to comply with the agreed pay, resulted in exerting physical violence and verbally abusing her employees as well.

Funke Akindele will sack you and not pay for the months you worked. So Petty that she will block or unfollow you on all social media platforms.

If everyone who has ever worked with Funke Akindele decides to speak up; the Internet will not contain it. https://t.co/vvgkcNliBy

Allegations of staff maltreatment against Funke Akindele continue to pile up as more people narrate their experiences working for her. pic.twitter.com/vaS1Obdl3I

Most people that have worked for Funke Akindele have negative stories to tell about her. They can’t all be wrong.

Meanwhile, KanyiDaily had reported how Funke Akindele was arrested, tried and sentenced to 14 days community service and fined N100,000 for flouting the government’s order on social gathering which was meant to prevent the spread of coronavirus.