A Former Imo Governor, Senator Rochas Okorocha has denied forming an alliance with the immediate past Governor, Emeka Ihedioha, to remove the incumbent Governor Hope Uzodimma.

Okorocha was reacting to allegation by Director General Imo APC Media Centre, Cajetan Duke, who claimed the Senator and his son-in-law, Uche Nwosu, had approached the court to challenge the victory of Governor Uzodinma, while praying the court to declare Ihedioha as the Governor of the State.

In a statement by his Media Adviser, Sam Onwuemeodo, on Sunday, July 26, 2020, Okorocha described the claim of alliance with Ihedioha as completely false.

The Imo West Senator maintained the APC administration in the state is a house he built at the risk of his political career, stating he would do nothing to bring it down.

“To say the least, Okorocha is not in alliance with Ihedioha for removing Governor Uzodinma or for any other reason. Those behind the story should stop making mockery of the APC or the State.

“Senator Rochas Okorocha cannot destroy what he had labored to build at the risk of his political career. He planted the seed of APC in Imo, nurtured it to maturity and it has continued to bear fruits.

“Those who have benefited from this vision only need to appreciate and acknowledge who God used to make it possible.”

Okorocha stated Uche Nwosu is not in any court over the 2019 governorship election.

“To the best of our knowledge, only two cases are in court to that effect. One, instituted by the governorship candidate of Reformed And Advancement Party (RAP), Barr. Kingdom Okere at the Federal High Court, Abuja and the one taken to the Supreme Court by Chief Philip Umeadi (SAN) on behalf of Chief Ihedioha.

“In the two cases, Uche Nwosu is neither the plaintiff nor a party in any of them. It is now left for those behind the story of alliance to tell us the particular court the Nwosu case, they had talked about, is,” he added.

KanyiDaily recalls that Uche Nwosu had denied approaching the Supreme Court to challenge its decision of awarding victory of the 2019 Imo governorship election to Hope Uzodinma.

READ:  US Congress Moves To Impeach Trump Over Claims He Sought Political Favour From Ukraine 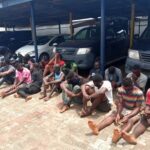