KanyiDaily recalls that a report of the Presidential Committee on Audit of Recovered Assets (PCARA) had indicated that Pastor Omala bought a landed property valued at N573 million in Dubai with laundered funds on behalf of Ibrahim Magu.

But Pastor Omale had denied the allegations in a letter by his lawyer, Gordy Uche, where he described the report as malicious, derogatory and libelous.

While testifying before an investigate panel weeks ago, FCMB disclosed that the bank made an error of paying N573 million into the church account of Pastor Omale.

FCMB managing director said the bank just discovered the mistake upon invitation by the investigate committee — four years after the money was posted.

However, Prophet Omale in a suit marked FCT/HC/CV/2020, and instituted by him, his wife, and the church trustees said FCMB’s false report to the NFIU made security agents put the church’s account marked 1486743019 under surveillance for four years.

“Sometime on or about the 6th day of July 2020 the former acting Chairman of the EFCC, Mr. Ibrahim Magu, was arrested and summoned to the Presidential Villa, Abuja, to appear before the Presidential Investigation Committee on the Alleged Mismanagement of the EFCC, Federal Government Recovered Assets and Finances From May 2015 to May 2020,” a statement by Omale’s lawyer reads.

“That one of the key allegations levelled at the Presidential Investigation Committee against Mr. Ibrahim Magu, was that the 2nd Claimant (Prophet Omale) fraudulently and corruptly purchased a real estate property for Mr. Ibrahim Magu in Dubai, the United Arab Emirates with the said sum of N573, 228, 04 allegedly credited as an inflow into the 1st Claimant’s (church’s) Corporate Current Account No: 1486743019 in the year 2016.”

Following the allegation, the clergyman disclosed that he was subjected to ridicule by members of the public. He also disclosed incurring the expertise of his lawyer, Gordy Uche which runs into millions of naira.

Against this backdrop, he demanded: “The sum of N5,000,000, 000.00 (Five Billion Naira) being exemplary, aggravated, special and general damages against the defendant for the negligent breach of its fiduciary duty of care to the claimants by its false automated report to the NFIU of a suspicious credit inflow of N573, 228, 040. 41 into the 1st claimant’s corporate current account number 1486743019 with the defendant, which has occasioned grave damages to the claimants.”

READ:  Outrage As Young Lady Is Caught On Camera Cooking Her Vag!na 'Spiritually' At A Herbalist 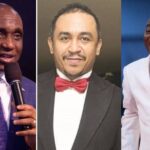 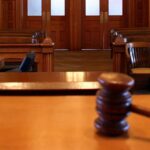