A young Nigerian man simply identified as Demola proposed to his girlfriend during a protest against the extrajudicial activities of the now-defunct Special Anti-Robbery Squad (SARS) in Alausa, Ikeja, Lagos State. 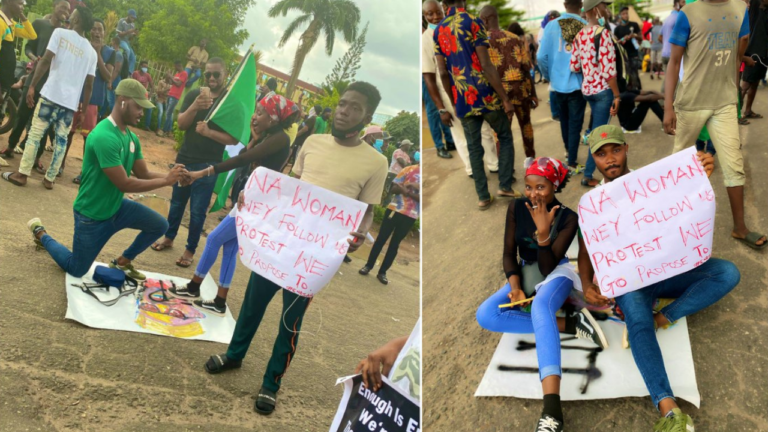 It was gathered that Demola took his fellow protesters unaware on Tuesday when he proposed to the love of his life in the heat of the #EndSARS protest against the SARS tactical unit of the Nigerian Police Force over brutality, illegal arrest, extortion, extra-judicial killings, among others.

The young man had one of his friends hold a placard while he took out the ring to pop the big question to his girlfriend, and she said ‘yes’.

Demola announced his big day in a tweet, alongside photos of the event where he can be seen on bent knees inserting what looks like a ring onto her finger.

The dramatic act lightened up the mood of protesters as some were seen smiling, others took pictures of the pair with their phones while his friends cheered.

READ:  "We Are Buying Gunboats For Navy To Tackle Crime, Oil Thieves In Rivers" – Governor Wike

Proposed to the LOML today & she said Yes. my friends were there to cheer me up… ☺️☺️ #SarsMustGoNow pic.twitter.com/ssxm4btiVz

KanyiDaily had also reported how a Nigerian lawyer identified as Asanya Ndidi staged a one-man protest against the extrajudicial activities of the now-dissloved SARS inside the National Assembly complex in Abuja.

READ:  TUC Threatens To Direct Workers To Stop Going To Work Over Fuel Scarcity In Nigeria 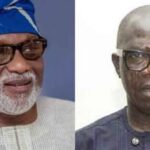