The Nigeria Police Force has extradited the former Chairman of the defunct Pension Reform Task Team, Abdulrasheed Maina, from Niamey in Niger Republic. 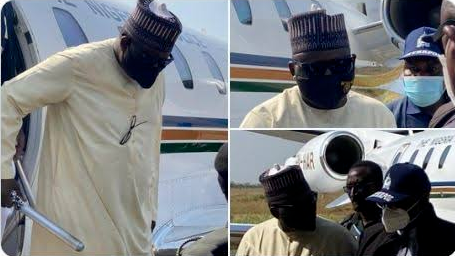 KanyiDaily had reported how Maina, who had been on the run after he was granted bail on July 27, 2020, was re-arrested by Niger Republic security agency on Monday evening, November 30.

PUNCH reports on Thursday that the former pension boss has been brought to Abuja where he was being held at a police facility.

The Commissioner of Police, Interpol NCB, Garba Umar, who confirmed the extradition, said the fugitive will be interrogated before handing over to the Economic and Financial Crimes Commission (EFCC) or the Nigerian Correctional Service for remand in Kuje Custodial facility.

READ:  Pastor Returns Wife Because She Was Married Off To Him By Parents Who Abducted Her

Maina, who is being prosecuted on 12 counts of money laundering to the tune of N2 billion by the EFCC, had jumped bail forcing the trial judge, Justice Abang Okon to issue an arrest warrant against him.

He was said to have stopped attending his trial since September 29, 2020, prompting Justice Abang of the Federal High Court, Abuja, to order the remand of his surety, Senator Ali Ndume penultimate Monday.

The court, however, granted bail to the Borno South Senator, last Friday, based on his record of good behaviour before the court, notwithstanding that the other grounds of his bail application failed.

READ:  PHOTOS Of Python That Swallowed A Goat In Abuja