A Nigerian consultant anaesthetist, Adekunle Okunuga, based in the United Kingdom has been reinstated following his suspension from work for beating his son. 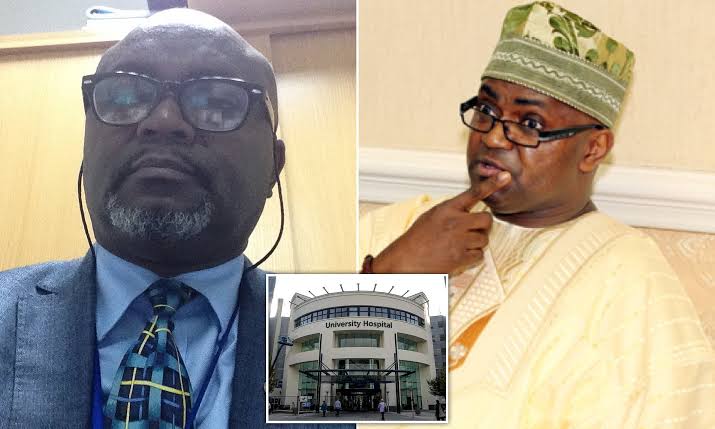 According to Daily Mail UK, the 59-year-old medical personnel, who was arrested after the incident in June 2014, blamed his cultural upbringing in Nigeria for the act, saying that corporal punishments are common in his home country.

Okunuga was said to have caned his son for misbehaving in school and made him stand one leg with his arms in the air while he kicked him. He also caned the boy’s open palms with a walking stick.

The boy got into trouble in school for not submitting homework, lying to other pupils, using the word ‘rape’ and for stamping in any injured girl during PE lesson.

In 2015, Okunuga’s name was ordered to be removed from the medical register after he was found guilty of professional misconduct by a disciplinary panel.

READ:  Governor Amosun Appoints 1000 Ogun Workers, One Month To End Of His Tenure

The 59-year-old doctor was arrested and convicted at Leamington Spa magistrates court for ill treating a child and was sentenced to eight weeks in jail and ordered to complete 160 hours unpaid work.

The boy was temporarily put in foster care and was later returned to his family.

Okunuga, who has been working at the National Orthopaedic Hospital in Lagos, is now free to return to work at the University Hospital Coventry.

“My actions embarrassed the medical profession and brought it into disrepute and as a member of the medical community, I should be role model. I apologised sincerely to the GMC and the wider public,” he was quoted to have said.

“My behaviour was born out of my cultural upbringing, I should have known better and I take full responsibility for my actions. If I were to witness a similar occurrence by one of my colleagues, I would be the first to speak up and take action and report it to the appropriate authorities.

“I have been working abroad but have always given full disclosure of my sanction to all employers and the relevant medical authorities.

“I have attended courses in order to maintain my professional development and am clinically ready to resume practice in the United Kingdom where I could be of tremendous support to the medical community.”

KanyiDaily had also reported how a 20-year-old woman was arrested for breaking into her ex-boyfriend’s home with a machete and forcing him to have sex with her at knifepoint.

READ:  Police Rescues Woman From Angry Mob After She Beheaded Her 11-Month-Old Baby In Cross River