Nigerian women on Wednesday stormed the National Assembly to protest the rejection of five bills that will include them in the leadership and governance of the country. 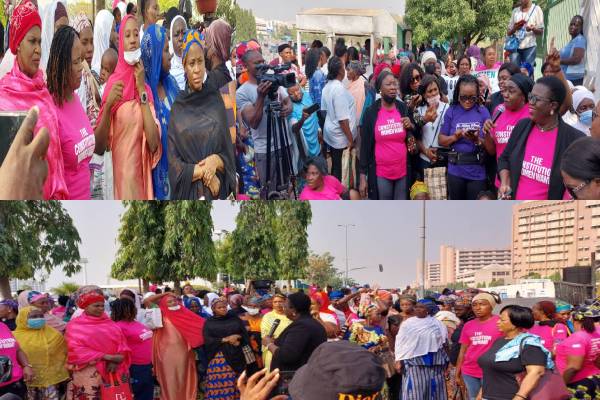 It was gathered that while voting on 68 bills to amend the 1999 constitution on Tuesday, none of the bills seeking to favour women scaled through.

On Wednesday, March 2, over 50 women groups stormed and blocked the entrance of the Complex in protest against the rejection of bills seeking to promote the interest of women in the amendment.

The protesting women, in their numbers, blocked the Federal Secretariat/ Eagle Square axis of the National Assembly in the early hours of the day and insisted that they would not leave until the Senate President, Ahmed Lawan, and the Speaker of the House of Representatives, Femi Gbajabiamila, come out to address them on the issues they described as ”a matter of urgent public importance”

The women who were armed with various placards expressing their displeasures over the development turned down the various entreaties to them to leave with assurances that their issues would be addressed and insisted that Lawan and Gbajabiamila must come out to listen to them and do something urgently to reintroduce the bills that were rejected.

Senate Minority Leader, Senator Enyinnaya Abaribe, came out to speak to them but they refused. Also, a ranking senator, Robert Boroffice, led a delegation of senators to appeal to the women, but they also refused.

Borroffice said they were from the National Assembly leadership and assured that their message would be taken back and dealt with, but the women were not to be deterred.

The women who equipped themselves with bottles of water to cool down as they vowed not to leave the vicinity of the Complex until their demands were met sat on the floor. to convince any doubting Thomas that they were not ready to leave in a hurry.

To keep themselves going, they were playing music and dancing and various supporters also addressed them.

One of their leaders, Dr Abiola Afolabi, said the treatment of the bills by the National Assembly was a manifestation of historical injustices against Nigerian women over the years

Dr Afolabi said it was unfortunate that the women were being treated shabbily when they have so much to contribute to making the country better.

She said what the women requested in the constitutional amendment was just the bare minimum as there is still a lot of issues to be addressed, noting that the constitution was discriminatory against women.

She said that the womenfolk were ready to rise up and take their destiny in their hands and called on women across the country to rise up to the occasion.

READ:  UPDATE On Morenike: Kidnappers Demand 10million Or They Kill Her This Afternoon

Other women leaders who spoke one after the other said that they felt disappointed and betrayed because they had the assurance of the National Assembly that the bills would be passed.

According to them, “Nigerian women are disappointed and aggrieved at the actions of the 9th National Assembly (NASS) when they denied women the opportunity of inclusion and representation in governance by voting against the gender bills.

“The NASS has spoken loud and clear that they do not want progress for society: for mothers, aunties, sisters, wives, and for daughters.

“It is particularly sad that in a month globally dedicated to celebrating women worldwide, our NASS has chosen to deny women basic human rights particularly, the right to identity and belonging.

“The proposed gender bills in the 5th Constitution Alteration Bills that were all rejected are Bills targeted at addressing the current gender imbalance across the legislative arm of governments across the country whilst reducing the under-representation of women in political office.

“The men of the 9th NASS have reinforced the discrimination and political bias against women as enshrined in the 1999 constitution by:

“The men of the 9th NASS by their actions have taken us backwards. Their actions undermine the importance and relevance of women’s contribution to the governance of Nigeria including the key role women play to bring victory to political parties in elections at all levels across the country. They also voted against diaspora voting!

“Nigerian women, therefore, demand that all gender Bills be reconsidered. Ultimately, our demands will benefit not just women but Nigeria as a whole. More women in governance will only bring progress, and respect for Nigeria in the committee of nations. We cannot, in 2022, be negotiating the rights of women and the sanctity of the dignity of girls. We call on the National Assembly to represent these Bills as a matter of urgency and ensure that they are passed”

The protest came just as the House Deputy Whip, Rep Nkiruika Onyejeocha on Wednesday expressed disappointment over members’ votes against Bills on women’s inclusiveness in governance.

Speaking with newsmen in Abuja, Hon. Onyejeocha said if the bills had passed, it would have helped close the gap where Nigeria is ranked 184 out of 187 in the world ranking of women’s participation in politics.

She explained that the reason for the proposed additional reserved seat for women in parliament was because the male folks were not ready to give out space for the female from the already existing 469 seats at the federal level as well as that at the states level.

The lawmaker opposed the argument that the voting by members was culturally and religiously motivated.

According to her, members from the North whom I sat closed to at the plenary of which many claimed they will be against the bills concerning women voted in favour of the bills.

KanyiDaily had reported that yesterday, the National Assembly rejected a constitutional bill seeking to create special seats for women in the federal legislative arm of government.

READ:  Ministerial List: I Will Only Appoint People I Personally Know – President Buhari