It was gathered that the actress was confirmed dead at the East Side hospital Enugu after she slumped while cleaning the Chapel of St. Leo the Great Catholic Church Federal Housing.

According to reports, the priest, Rev Fr. Uchendu Chukwuma was among the parishioners who rushed her to the hospital where she was confirmed dead on Saturday, April 30, 2022.

At the time of filing this report, the cause of her death is yet unknown and efforts were being made to contact her family members before depositing her body in the morgue.

Her fellow actress, Iheme Nancy, confirmed the news on her Instagram page, said she is yet to come to terms with the shocking death because Chi came all the way from Enugu to console her when she buried her mother a few days ago.

Sharing a video of their encounter and photos of Chi’s lifeless body, Iheme wrote, “Just on 22nd you came all the way from Enugu to my hometown for my mother’s burial.

“You chatted me last night for me to reply you this early morning, you said Men are Mean, then you called me to check on me , asking me how am coping with my mother’s death not knowing it was the last time I will ever hear from you.

“Baby your dead shocked me under how many (5) hours and then ,the news of your death. God have mercy on your soul. I feel broken. Chi babym…. oh my goodness.

“when I saw your lifeless body from the video I felt numb. God reveal that which we don’t know. @chi_benards May your soul Rest In Peace.”

READ:  Watch Shameful Edo Woman Based In Spain Using 'Juju' Against Her Rival On Facebook [Video] 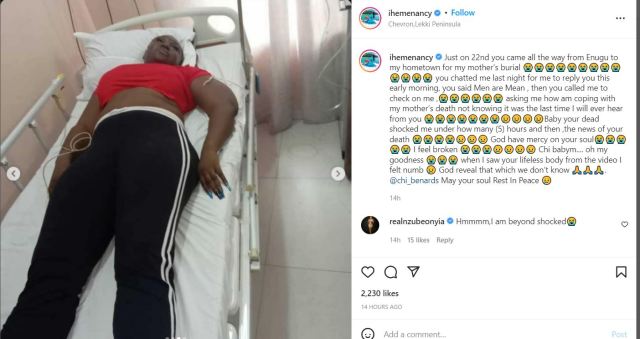 KanyiDaily had also reported how Nollywood comic actor, Kunle Adetokunbo, popularly called Dejo Tunfulu, died a few days after attending a birthday party with his colleagues in the movie industry. 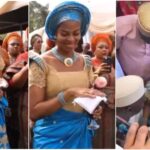