The Alaafin of Oyo, Oba Lamidi Adeyemi has been buried in the ancient town of Oyo, following his death late on Friday.

Oba Adeyemi was buried on Saturday after a Janazat prayer was conducted on his body by Islamic clerics led by the Chief Imam of Oyo, Shelkh Moshood Ajokidero.

After the prayers, his body was then taken back to the palace, where traditionalists held final rites for the king behind closed doors.

His body was later brought out into the main hall where the late king had received visitors when he was alive.

At the time of his death, the Alaafin was 83 years old and had been on the throne for over 50 years — he was the longest-reigning Alaafin.t, Olusegun

Former president, Olusegun Obasanjo has paid glowing tributes to the Alaafin of Oyo, saying he died “at a crucial state in our nation’s history when his wise counsel and rich experience are greatly needed.” 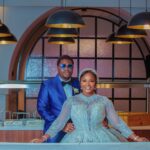