River State Governor, Nyesom Wike has ordered the prosecution of the alleged illegal financial dealings involving the immediate past governor, Rotimi Amaechi, Tonye Cole, Sahara Energy, and others over the sale of state assets. 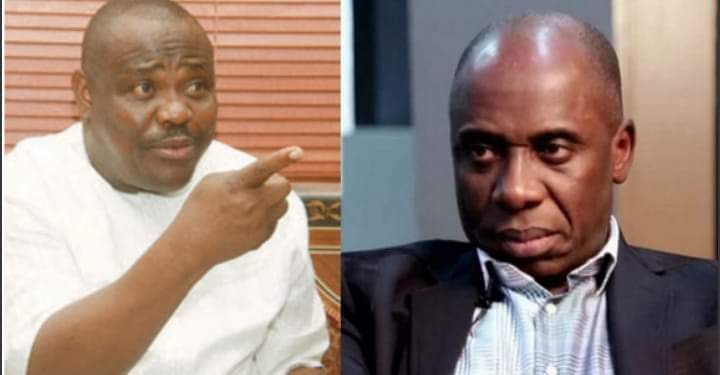 Amaechi and others were accused of the “illegal sale of a number of state government’s assets and disappearance of $50 million from the state’s account without proof of where it was deployed.”

Governor Wike directed the Attorney-General and Commissioner for Justice, Prof. Zaccheaus Adangor to commence immediate prosecution of the accused persons on Friday at the Executive Chamber of Government House, Port Harcourt, after swearing-in three new commissioners.

This was contained in a statement issued by Kelvin Ebiri, media aide to Governor Wike in Port Harcourt on Friday.

“Attorney General, you’re at a critical period where people want to know what the State is going to do with the Judiciary Panel of Inquiry after the Supreme Court judgement on it. Luckily, you came at the right time when we have preferred criminal charges against the former governor (Amaechi), Sahara Energy, Tonye Cole and the rest of them,” Wike said.

He said there was a need for Rivers people and the rest of the world to know what actually happened to the $50 million that disappeared from the state’s account without proof of where it was deployed.

“So, you are coming at the right time to take over the matter and to make sure it is prosecuted diligently. I don’t want to hear excuses. Let the people see what happened to our money.

“The world will see how $50 million Dollar from our account was moved to a company without nothing to show whether there was a business,” the governor said.

The protest letter to be written to EFCC, Wike said, was predicated on the fact that, recently, its officers attempted to harass and intimidate Fubara, who before his emergence as the PDP governorship candidate, had served as the Accountant General of Rivers State.

The governor said EFCC needs to know that the era of impunity and flagrant disobedience to the rule of law was gone, saying his administration will not accept such behaviour.

He maintained that the attempt to harass the state PDP candidate will not be accepted as the state government will not hesitate to charge the EFCC for contempt.

Wike explained that before now, the Rivers state government had gotten a subsisting court judgment against the EFCC that it cannot investigate the state finances or its officers.

He said there was also another judgment against EFCC by the PDP governorship candidate to enforce his fundamental rights, which have not been set aside.

“Rivers State government had a judgment against EFCC since 2007. The court said you (EFCC) have no business in the financial transactions of the (Rivers) State. EFCC has been struggling to set aside that judgement until now. They have not even appealed it,” Wike stated.

The governor noted that nobody will accept the use of EFCC in such political period to intimidate persons in order to achieve their skewed political goals.

“We are in a political period. People should not think that they will use EFCC to intimidate or manipulate him (Fubara). Nobody will accept that. So you (Attorney General) have to attach the judgment of the candidate against EFCC and send the right signal to them that we are not people that can be cowed,” he added.

KanyiDaily recalls that Governor, Nyesom Wike had boasted that God used him to install Rotimi Amaechi, as governor of River state.

READ:  Lawmaker Sent To Prison For Beating Up Married Woman, Forcing Her To Walk & Dance Naked In Public