Nollywood actor and filmmaker, Yomi Fabiyi has accused his baba mama, Grace Oreofe, of domestic violence while denying being married to her. A blogger had accused the film star of infidelity and lack of respect for his baby mama, claiming that Fabiyi’s “second marriage to Grace is over after he took her to court over an undisclosed issue”.

Grace, who welcomed a baby boy with Fabiyi earlier this year, told the blogger that everything is not working fine in their marriage and has made plans to move out of their matrimonial home.

Although she was not specific about the problems surrounding their alleged breakup, Grace claimed she was being used by Fabiyi who always acts like the victim and blames her for every issue in their marriage.

Reacting in a series of post via his Instagram page, Fabiyi disclosed that he wasn’t married to Grace, noting that he has nothing but respect for the mother of his child.

The actor explained that he got married just once in his life which lasted for 10 years before they split. He also hurled insults at the blogger, who he described as “stupid, coward, faceless quack and criminal”.

The actor went on to deny several sex-for-role allegations leveled against him. He also published several chats and video footage while accusing Grace of domestic violence.

“Should one stupid, coward, faceless quack, criminal blogger, who defy’s every lawful ethics gives a violent, blackmailer and pathetic liar audience bother me?. I gave full honour, respect & support a woman who birth 4 me deserves. I have only been married once and it lasted 10yrs,” Fabiyi wrote.

“SOCIAL MEDIA & SECRET BLOGGING: If what you are doing is right. You are sure ur family, the law will be proud of you, there should NEVER be reason to hide your identity from the public or authority. ONLY CRIMINALS OPERATE THAT WAY & ONLY CRIMINALS PROMOTES & FAN SUCH Disgusting”

READ:  President Buhari Says He Was Disgusted By CNN And BBC Coverage Of #EndSARS Protests 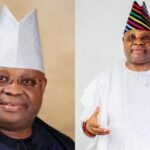