Nollywood actress, Funke Akindele has reportedly been nominated as the running mate for the governorship candidate of the People’s Democratic Party (PDP) in Lagos State, Olajide Adediran, popularly known as Jandor. 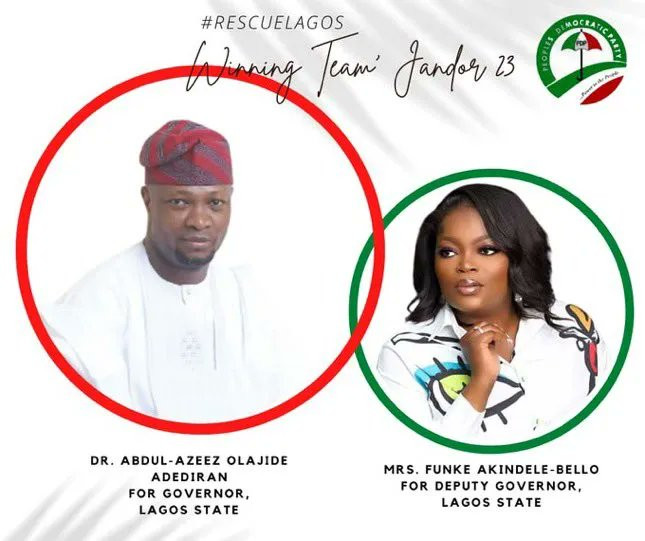 Last Friday, Adediran’s media aide, Gbenga Ogunleye announced that the actress was one of the five persons under consideration as Jandor’s running mate, but she hasn’t been confirmed.

“She was nominated alongside four other people, whose names are Gbadebo Rhodes-Vivour, Kolawole Vaughan, Adenike Shobajo and [Rasheed] Teslim-Balogun. Jandor has not named anyone as his running mate yet.”

It was learnt that Funke Akindele was nominated as Adediran’s running mate on Wednesday, July 7, after going through the screening process.

The actress and the governorship candidate were flanked by supporters who tried to take photos with them.

READ:  "I Can't Marry A Man That Can't Fight" - Chidinma Reveals The Kind Of Husband She Desires

Akindele’s nomination is coming barely a week after her colleague, Tonto Dikeh was also nominated as the running mate of the ADC governorship candidate in Rivers State.

READ:  P.Diddy's Ex Girlfriend Reveals How She Aborted 2 Pregnancy For Him While He Was Dating Cassie